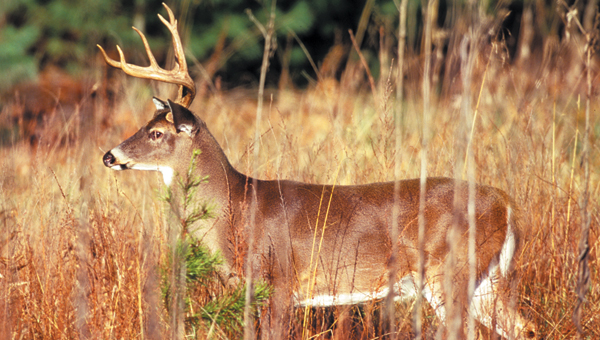 The Alabama Department of Conservation and Natural Resources is considering extending the gun season in a portion of the state. (Metro Creative Services)

Hunters in Alabama may soon have a few more days to chase that trophy buck.

The Alabama Department of Conservation and Natural Resources is considering extending the gun season in a portion of the state.

If the proposal is approved, the season in the southwest portion of the state would be extended to Feb. 13, beginning in 2014.

The current proposal would extend the season south of U.S. Hwy. 84, which runs through Dothan, Enterprise, Andalusia and Grove Hill.

Chuck Sykes, the director of the Alabama Wildlife and Freshwater Fisheries Division, said using Hwy. 84 as a dividing line makes sense because it offers a smaller land area to use as a sample to see if extending the season will help or hurt the state’s deer population.

“You’ve got to start somewhere,” Sykes said. “The data shows the corner of southwest Alabama is where we can do the most good, and expand it (to other parts of the state) if it works. The research has been done. The area has been designated. Now we’re trying to make the right call.”

A proposal will be presented to the Conservation Advisory Board at its meeting Saturday in Montgomery, but no action will be taken. Advisory board rules state that no regulation may be voted on during the same meeting it is introduced in order to provide the board a chance to hear feedback from the public.