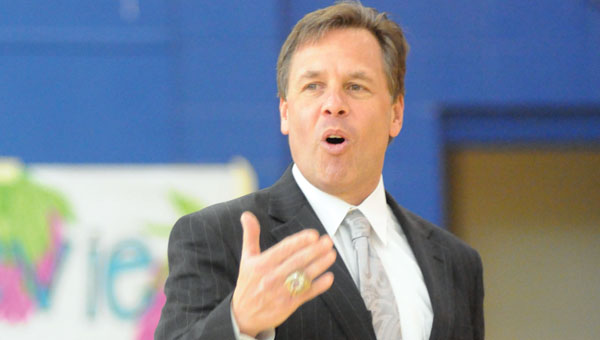 Kevin Elko talks to himself.

He knows he gets some strange looks.

After all, only crazy people talk to themselves, right?

But Elko insists he’s not crazy. He’s simply found what he believes is the key to success.

“True success has little to do with what others say about you and everything to do with what you say to yourself,” Elko told the student body at Fort Dale Academy Thursday. “I talk to myself all the time, and I even do it out loud.”

Elko, who serves as a motivation consultant for the University of Alabama’s football team and has worked with professional teams such as the Dallas Cowboys of the NFL and the Pittsburgh Penguins of the NHL, calls the technique self-talk.

According to Elko, self-talk helps one eliminate unwanted thoughts or “mental clutter” that can weigh a person down and keep him or her from achieving their highest potential.

“It’s all about reaffirming yourself, and reminding yourself of what’s really important,” he said.

What’s really important, according to Elko, is helping others.

Elko told the students that each day he repeats a phrase to himself.

“Everyday I say this, “I’m not looking for blessings to come to me. I’m looking to be a blessing to someone else,” he said. “In Tuscaloosa that’s what we try to do.”

Elko also challenged Fort Dale’s students to find their gift and then use it to help others.

He has consulted with various successful teams including the Pittsburgh Steelers, the Philadelphia Eagles, the Miami Dolphins, the New Orleans Saints, LSU’s football team and the University of Miami’s football team.

He is the author of four books, Nerves of Steel, The Pep Talk, True Greatness: Mastering the Inner Game of Business Success and Touchdown: Achieving Your Greatness on the Playing Field of Business and Life.