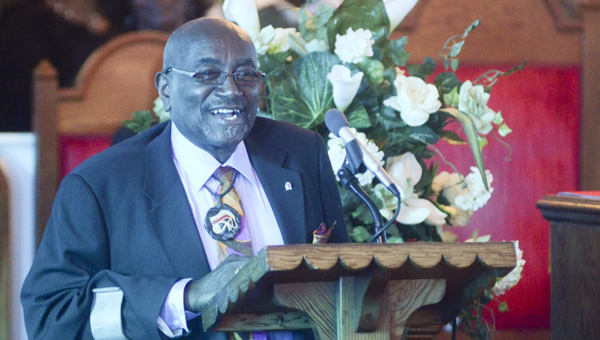 St. John Missionary Baptist Church in Luverne was packed on Monday afternoon as people from around the county came to celebrate the life of Dr. Martin Luther King, Jr.

The program is in its third year, and the theme for this year’s event was “Living the Dream.”

The Rev. W.O. Edwards told a short story to illustrate the reason for the program.

He said that the city of Opp was closed on Monday, but its Parks and Recreation Director asked him if he thought they should play rec league basketball that night.

Edwards said he thought a minute and said, “Yes,” but the director pointed out that many places had canceled all events for that day.

Dr. James Edward Lamar was the keynote speaker for the event.

A graduate of Dozier, Lamar obtained degrees from Alabama State, Tuskegee and others before beginning to teach.

He taught math and physics at Miami Dade College in Florida, where he retired.

Lamar said he was involved with King during his time at Alabama State.

“Rev. King was a person with a strong desire to do something,” he said.

Lamar, who walks with crutches, and has done so for much of his life, said that he didn’t participate in marches, but he found other ways to get involved.

“I couldn’t march, but I could drive,” he said.

Lamar said he worked with others to transport marchers to the appropriate locations, including a woman named Viola Liuzzo.

“I dropped her off at the Capitol one day, and that was the last time I saw her,” he said.

Liuzzo was assassinated by members of the Ku Klux Klan in Lowndes County on March 25, 1965.

Lamar said that even though King didn’t live to see age 40, he was still able to make a difference.

“We can be great in a few years,” he said. “We don’t have to live a long time.  These things can happen if we are dedicated to what we want to do.”

As an educator, Lamar said one of the biggest changes during the 59 years he’s been out of high school is the integration of schools.

He said he’s proud that students graduating today can be able to go to the University of Alabama or Auburn University.

He also said that those young black men who attend those college have been crucial to the success of their athletic programs.

Lamar said that he feels like other black pioneers like Benjamin Banneker, Daniel Hale Williams and George Washington Carver also need to be emphasized.

“We need to let our young folks know that we can do these things,” he said.

Lamar also said that we need to be thankful to King and continue his work.

“What can we say?  We need to do something,” he said. “We need to be dedicated, we need to be committed, and we don’t need to give up.”

Others who participated in the program include the Rev. Jonah Rodgers, James Woods, Charlie Sankey and Vester Burnett.

Several songs were led by the Anointed Voices from Elba, and Dominique Caldwell of St. Matthew A.M.E. Church in Brantley performed a dance.

Bennie McDonald recognized the “Luverne 10,” who were among the first black students to integrate the Crenshaw County School System in 1965, and Martha Thomas spoke about the legacy and life of Dr. King.

At the end of the program, Luverne City Councilman Charlie Johnson presented Lamar with a plaque and also made an announcement.

Johnson said that the Luverne City Council unanimously voted to name a street for Dr. King, and that Rutledge Street will have its name changed in the near future.