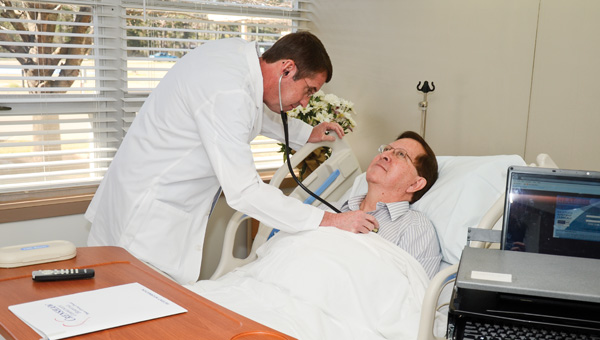 Crenshaw Community Hospital has rolled out several improvements to its facilities this week, including a number of new beds.

The hospital also announced that this week marks its change to all private rooms, said Hospital Administrator Brad Eisemann.

A private room means that each room will only have one bed in it.

“We have additional beds on reserve, and it won’t affect our ability to take care of patients,” Eisemann said.

Many of those beds are state-of-the-art.

“We brought in three vendors and put patients in the beds for a four-to-six week test period,” said Tara Odom, Director of Nursing.

Odom said that based on the feedback from both patients and nurses, one brand was selected and 16 new beds were delivered on Tuesday.

The beds not only have built-in scales to allow patients to be weighed without moving them, but they also have bed exit alarms that can be set to notify staff if the patient falls.

The beds are also motorized and convert to sit up like a recliner, making it easier to move patients in and out of them.

“The mattresses are very comfortable,” said Dr. Pat Walker, who tested out one of the beds after its delivery.

The beds were paid for by the Crenshaw County Hospital Authority, a publicly-funded entity that owns the hospital and uses county ad valorem tax revenue to maintain and upgrade the facility.

“We’ve made a concerted effort with the hospital board to improve care and make a place where people want to come,” Eisemann said.

Among the other improvements announced this week are the addition of equipment that allows the insertion of a peripherally inserted central catheter, or PICC.

Nurse Sherry Johnson said that PICC lines allow medications and treatments to be delivered that couldn’t normally be delivered by I.V., and that it can be inserted for up to a year.

“It has to be placed by a nurse with a special certification,” Johnson said.

CCH is the only hospital in a five-county region that has that capability and aims to give patients from Crenshaw, Butler, Pike, Coffee and Covington counties an option besides having to travel to Montgomery.

The hospital has also recently received a new high-definition endoscopy system and a C-arm, both of which will be beneficial in surgery.

The C-arm is a piece of radiology equipment which will allow for additional orthopedic surgeries to be performed at the hospital along with uses in general surgery.

The new equipment is the latest in a number of moves CCH has made to update its systems.

Nearly two years ago, the hospital switched to NextGen, a program that creates and manages electronic health records and replaces a paper chart.

The program is integrated with the lab and other hospital areas, allowing digital images, medications and past medical history to be automatically kept on file.

The move came on a mandate from the government, and Eisemann said that the hospital has met the first and second year requirements for the program.

The ultimate goal is to have a network where hospitals can share information, allowing for a hospital in Birmingham or Montgomery to have records instantly if a patient is transferred.

Several hospital board members were on hand Tuesday to see the new additions, including Barnett King and Braxton Laird.

Laird said he had recently spent time in another hospital and came away with an appreciation for CCH, particularly the housekeeping.

“I’m real proud to see those beds, the private rooms and how nice it looks,” said King. “I don’t want to need one anytime soon, but they are nice.”