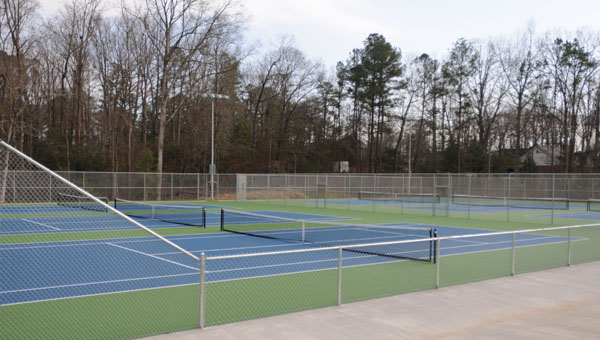 The City of Greenville held a grand opening ceremony Wednesday for its new municipal tennis courts, which are located next to the YMCA. (Advocate Staff/Andy Brown)

“This has been a long time coming,” Mayor Dexter McLendon said.

Construction of the courts, which are located next to the Greenville YMCA, began in March of 2012, and officials expected the courts to be open this past summer, but once the project was underway the contractors ran into issues with the site where the courts were built.

“When they started to move the dirt, they ran into pockets of debris,” said Eddie Anderson, building inspector for the City of Greenville. “

Anderson said he believes the area where the tennis courts now sit was used as a dump area when Greenville Academy, a private school that was later converted to the YMCA, was built.

“They had to come out and put good dirt in those areas before they could move forward,” Anderson said.

The total cost of the new facility was $439,432. The project was funded with money from a $9.2 million bond issue that was approved by the Greenville City Council in September of 2011.

“We’re very proud of this facility,” McLendon said. “These courts will be an asset to our community and offer something else for our citizens to enjoy.”

The improvements are the first to be made to the city’s tennis facilities since the early 1980s when the city built four tennis courts behind Beeland Park.

“Those courts are in terrible shape,” McLendon said. “It was time we did something about it.”

The addition of the two extra courts will allow the city to host tennis tournaments, which will generate sales tax and lodging revenue, according to McLendon.

On Wednesday, the courts saw their first action when Bobby Terrell, a 2012 inductee of the Greenville High School football hall of fame and former tennis standout at Troy State University, hit the ceremonial first serve before a crowd gathered to celebrate the opening.

The courts are open to the public and not subject to YMCA membership or fees.