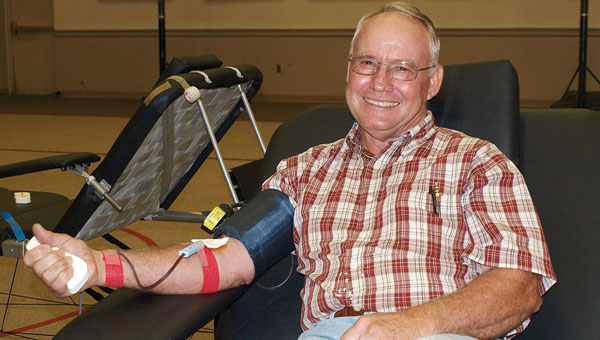 Ronald Burkett participated in Butler's Biggest Blood Drive, sponsored by the American Red Cross. On Wednesday, the Red Cross reported there is a shortage of O negative and B negative blood. (File Photo)

There is an urgent need for blood – specifically types O negative and B negative, American Red Cross officials said Wednesday.

To generate supplies, 14 drives are scheduled during the next two months said Megan Jefferson, donor recruitment accounts manager for the area. January also happens to be national blood donor month, she said.

“Blood Donor Month comes at an opportune time, as January can be an especially challenging month to collect blood and platelet donations due to inclement weather and seasonal illnesses,” she said.

Jefferson said distributions of types O negative and B negative to hospitals are outpacing donations creating an urgent need.

“Patients can’t afford for you or donors to lose interest in the mission of saving lives,” Jefferson said. “Shortages can cause surgeries to be postponed and those who get regular blood products not to receive them at normal frequency. Our region supplies approximately 100 hospitals and needs 600 donors each day to meet the demands.”

“We collected 209 units saving up to 627 lives, and it’s because of everyone’s efforts that we saved the lives we did,” she said.

For January, Jefferson said the Red Cross is scheduled to provide area hospitals with 263 units; however, there is a need for an additional 50 units.