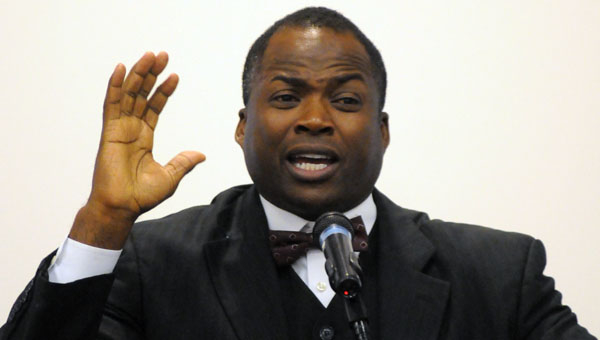 As an 18-year-old Siran Stacy took a walk down a long, dark road.

It was a literal road, but it served as a metaphor for another long, dark road that Stacy would travel nearly two decades later.

The first of the two roads was a stretch of blacktop in Coffeyvile, Kan.

The Geneva, Ala., native had just spent the last 33 hours on a Greyhound Bus chasing his dream of playing college football at the University of Alabama.

“We got to the bus station, which was really just a gas station with one light hanging from the roof of this covering, and the bus driver looked at me and said, ‘You have to get off,’” Stacy said. “There was no one there to meet me. There was no one there at all, but the driver told me the school was about a mile or two down the road. So I got out and started walking down this dark road. Kansas is flat, so I could see the taillights of the bus leaving me for miles, but I kept walking.”

Stacy kept walking because he was chasing a dream that was born a decade earlier.

There was, however, an open invitation from Coffeyville Community College to play for the Red Ravens. Stacy saw that invitation as a way to keep his dream of playing for the Crimson Tide alive.

“There was something inside of me that said ‘You do not quit,’” Stacy said. “I knew that going to Kansas was something I had to do, so I told my mom that I was going.”

So Stacy packed a bag and boarded the Greyhound Bus bound for Coffeyville. The move paid off.

Stacy became one of the nation’s most sought after running backs after a standout career during his two years in Kansas. Shortly after his sophomore season ended, he achieved his dream and signed a scholarship to play football at the University of Alabama.

He went on to become a second-team All-American and a first-team All-SEC performer during his two seasons in Tuscaloosa.

Seven years after Stacy hung up his helmet, he found himself walking down the second long, dark road.

On Nov. 19, 2007, Stacy and his family were returning home from his mother’s house when a drunk driver crossed through an intersection and smashed into Stacy’s minivan.

Stacy spent a month in the hospital in a coma. When he awoke, he said he just wanted to die.

“I didn’t want to live,” Stacy said. “My soul ached. We talk about weeping and crying, but there is another type of mourning where your soul actually breaks. That’s where I was. I didn’t want to live. If it weren’t for my faith, I wouldn’t be standing here today.”

Stacy believes that 29-year-old Adam Wayman, the drunk driver who also died in the crash, struck the minivan carrying Stacy and his family in an attempt to commit suicide.

What he did was change Stacy’s life forever.

“He took my wife and my kids,” Stacy said. “He made a choice to quit and that decision eventually led to that fatal night.”

Stacy, who said he “had it out with God” following the crash, now shares his story in hopes of inspiring others.

Stacy, who a year after the accident started Siran Stacy Ministries, shares his message of tragedy and triumph with a variety of groups including churches, high schools, corporate groups and prisons. On Wednesday, he was the keynote speaker at the Butler County School System’s teacher in-service.