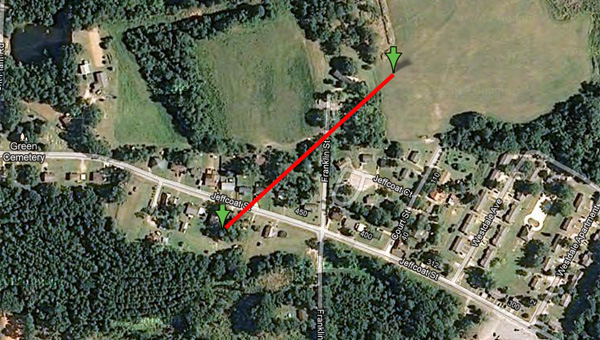 The red line shows the path of the tornado that hit Luverne on Christmas Day. (Google Maps/Michael Rodgers - graphic)

Preliminary findings from National Weather Service surveys show that damage around Crenshaw County from two storms on Christmas Day were the result of tornadoes.

According to the NWS, the first tornado touchdown down briefly in a wooded area just south of Jeffcoat Street in Luverne at 4:21 p.m. and uprooted two hardwood trees.

As the tornado crossed Jeffcoat Street, it caused roof damage to two houses before continuing northeast, where it crossed Franklin Street and caused significant damage to a third home and snapped two pine trees.

The tornado rapidly dissipated as it moved into an open field.

The length of the path of the tornado was 0.2 miles, and the width is listed at 50 yards.

At 4:28 p.m., the NWS indicates that another tornado touched down in Patsburg along Live Oak Road, near the intersection with Sims Road.

Surveys say that a large pine tree was snapped, car windows were blown out in two vehicles, and metal roofing was peeled off a small, vacant metal building along with significant roof damage to a home.

Overall, the tornado’s path is estimated at 0.07 miles long and 20 yards wide. 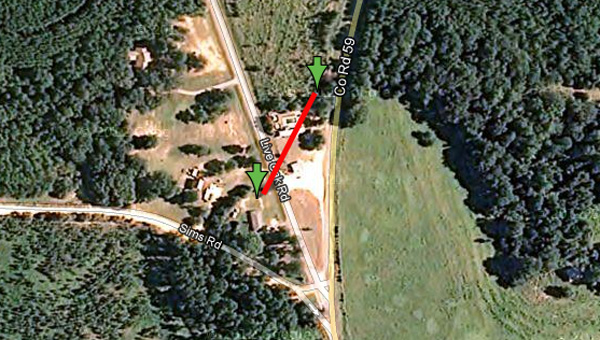 The red line shows the path of the tornado that hit Patsburg on Christmas Day. (Google Maps/Michael Rodgers - graphic)