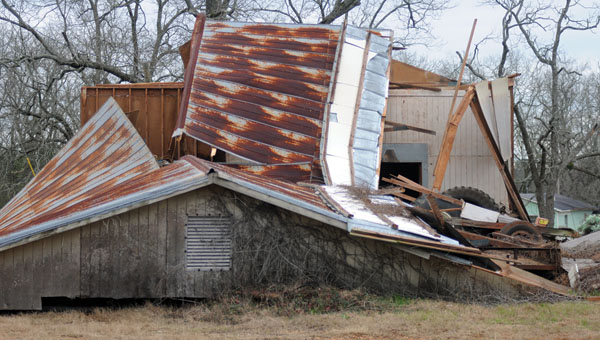 Strong storms on Christmas Day toppled a barn on Mashville Road, while destroying a house on Country Lane in Georgiana and leaving hundreds of residents across the county without power.

The weather outside was indeed frightful on Christmas Day as a series of dangerous storms ravaged the Southeast, including much of Alabama.

Tornado warnings lit up the state like a Christmas tree in the evening hours of Christmas Day, which spawned more 34 tornadoes between Texas and Alabama, according to the National Weather Service.

Pioneer Electric Cooperative, which services more than 10,000 customers across four counties, reported that roughly 15 percent of those customers experienced power outages on Christmas, with the majority of those affected coming from Lowndes County.

Many customers have since had their power restored, including all 209 residents of Butler County that experienced outages, as well as those in Crenshaw County.

But those left in the dark weren’t the only victims of the Christmas storms.

“We responded to a call this morning in which a tree fell on a house Christmas night where a man was asleep in bed on 16 Country Lane in Georgiana,” said Butler County Sheriff Kenny Harden.

According to witnesses, the tree fell on the house sometime between 9:30 p.m. and 10 p.m.

The man, whose identity authorities were unable to reveal at this time, was rescued from his home Wednesday morning and transported to Georgiana Hospital. He was later flown to a nearby hospital for treatment, according to Harden.

Harden added that several structures were damaged in the destructive winds of the storm, including a number of power lines on Honoraville Road and Canterbury Road that had been knocked down by trees.

A barn on Mashville Road was also destroyed, and a house on Highway 10 East had its roof taken off.

EMA Director Shirley Sandy noted that it was the weather system’s tendency to produce storms with a high chance of spawning tornadoes that made this Christmas one for the record books.

“It made history for the most tornadoes on Christmas day,” Sandy said.

The storms left Butler County relatively unscathed, considering the plight that faces neighboring counties well after the weather has passed. In spite of it all it all, Sandy considers Alabama residents lucky.

“I think the whole state fared well on this one,” Sandy added.

“Butler County had it all around us.”

Harden echoed those sentiments, taking care not to belittle the effects of the storms.

“With the way the weather was coming through, I guess you could say we dodged a bullet,” Harden added. “We had some damage and one injury, but it could’ve been worse.”