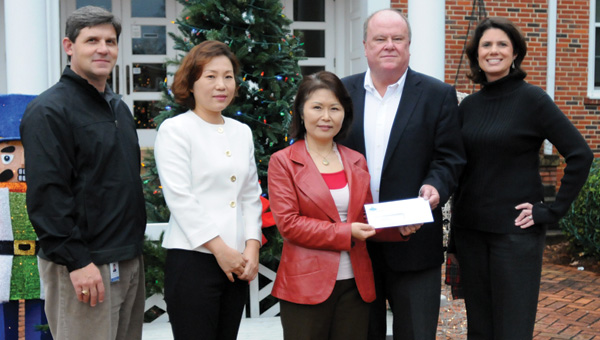 Meesoon Han is hoping to help bridge the cultural divide between Korea and the United States.

Han said the goal of the program is to provide an avenue for academic, educational and cultural exchange between Alabama and Korea, while creating “future global leaders.”

“This is a once in a lifetime opportunity for these students,” Han said. “It provides them with an opportunity to be immersed in a different culture, to identify the differences in those cultures and learn to respect the differences.”

A-KEEP and the Korean government, particularly Gyeongbuk Province, provide the scholarships for the selected students to cover the entire expenses except personal expenses.

A-KEEP also has a number of sponsors that help cover the cost of the program, including the KJ Choi Foundation, Alabama Industrial Development Training, AiA Recycling, BBVA Compass Bank and Hyundai PolyTech America.

On Monday, Southeast Alabama Gas District became a sponsor with a $5,000 donation.

Shannon Gooden, the marketing and communications manager for SEAGD, said it just made sense for the company to support the program.

“We have 14 Tier I and Tier II (Hyundai) suppliers in our district,” she said. “For us this is an opportunity to be a part of something that will benefit not just the Greenville area, but our entire service area.”

Among those 14 suppliers are Hwashin America and Hysco America, both of which are located in Greenville.

Greenville Mayor Dexter McLendon, who serves on the board of SEAGD, said he believes being a part of this program will be a “tremendous benefit” to the area.

“When I can tell Korean companies that we are involved in a program like this, there’s no way that isn’t going to help with economic development,” he said. “This is the kind of program that bridges cultural gaps, and it’s a great opportunity for us to reach out to our Korean friends and learn about their culture, as well as share our culture with them.”

McLendon said Fort Dale Academy headmaster David Brantley has been receptive to the program and hopes that the Butler County school system will also support the program.

Han said the program already has the support of the Alabama Department of Education. In fact, State Superintendent Tommy Bice serves as chairman of A-KEEP’s executive board.

“This program is open to all the schools in the state, and we want students from this area to participate,” Han said.