Arrest made in Leatherwood murder 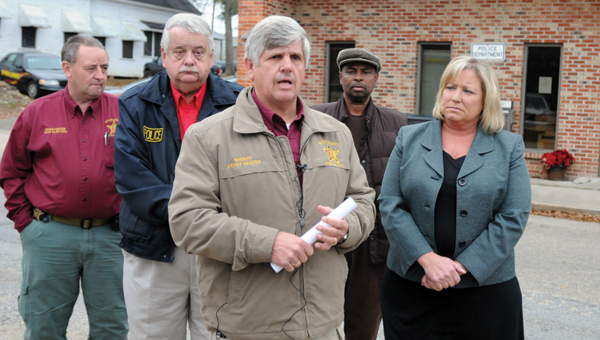 Butler County Sheriff Kenny Harden announced Friday that the BCSO made an arrest for the murder of Dorothy Leatherwood. (Advocate Staff/Andy Brown)

The Butler County Sheriff’s Office has made an arrest in the murder of a 72-year-old Georgiana woman.

Shawn McClain, 27, was arrested Thursday night and charged with the murder of Dorothy Leatherwood.

Leatherwood was murdered inside her home on Wise Street in Georgiana on Nov. 14.

“This is a good day,” Butler County Sheriff Kenny Harden said. “The citizens of Georgiana can feel safer now that we have him in custody. I’d like to commend my staff, the District Attorney’s Office, the Georgiana Police Department and the Department of Forensic Science for their work on this case.”

Harden said McClain was arrested at approximately 6 p.m. Thursday night at his father’s house on Slim Lane just outside Georgiana.

Authorities have not yet released a motive for the murder.

“We can’t comment on that at this time,” Harden said. “We’re still working on a few things.”

District Attorney Charlotte Tesmer petitioned Russell for, and was granted, a $500,000 bond rather than the customary $100,000 bond.

“This was a home-invasion murder, and was brutal,” Tesmer said. “Georgiana is a small community and since the murder most of the people in that community have been sleeping with a gun beside their bed. There’s a strong possibility that we could be looking at capital charges.”

Russell set a preliminary hearing in the case for Feb. 27 at 9 a.m.

“The hearing will not deal with guilt or innocence, but whether or not there was probable cause for the arrest,” Russell said.

Pamela Lewis, Leatherwood’s niece, thanked the members of the BCSO, Georgiana Police Department and the District Attorney’s Office for their efforts in apprehending McClain.

“I’m thankful for everyone’s hard work on the case and for making sure that (McClain) gets what he deserves for what he has done,” she said.

Georgiana Mayor Jerome Antone said he hopes that McClain’s arrest will offer some closure to the community, which was rocked by Leatherwood’s murder.

“Maybe now the citizens of Georgiana can relax and go on with their ordinary lives,” he said. “I’m thankful for the work of the Sheriff’s Office and the Georgiana Police Department that led to an arrest for this heinous crime.”