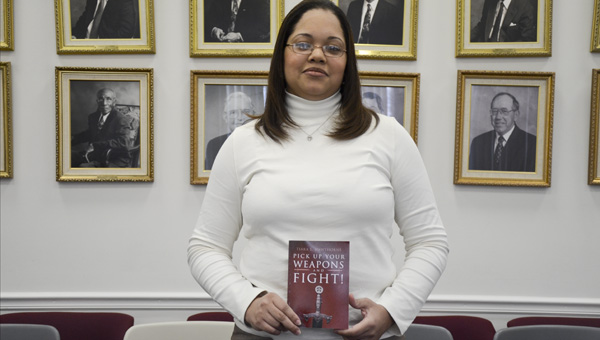 Brantley’s Tiara Hawthorne has gone through training with military weapons, but this week, she celebrated the release of her book that deals with a different kind of weapon.

Hawthorne wrote “Pick Up Your Weapons and Fight!” which was released on Tuesday.

“It’s a Christian book, and a lot of it is somewhat of a testimony,” she said. “I was able to relate natural experiences with spiritual experiences.”

Hawthorne is the pastor of GodChasers Ministries on Highway 106 south of Brantley, and she is a veteran of the Air Force.

She said that the premise for the book began to form while she was in boot camp, but it wasn’t until later that she began to fully draw on her military experiences.

“I’ve experienced spiritual warfare in my personal life, and the memories all came back,” Hawthorne said.

She began keeping a journal, which later became the basis for the book.

“One day the Lord told me to look for a publisher,” she said. “It had never crossed my mind.  I thought this publisher [Tate Publishing] was the best fit, and it started coming alive with the editing process.”

Hawthorne describes the book as going behind enemy lines from a spiritual perspective and learning the ways of spiritual warfare.

Ephesians 6:11-18 outlines the full armor of God, and Hawthorne said that is the foundation for her book.

She said she views her book as a supplemental read to accompany other studies.

Hawthorne lives in Brantley with her husband, Demetrius, and their children.

She said she’s excited that the three-year book-writing process has resulted in the release of her book.

Hawthorne held a book signing last week at the Luverne Public Library, and the book is available at all major retailers, Amazon.com and Tatepublishing.com.