Christmas at the Ritz Dec. 8 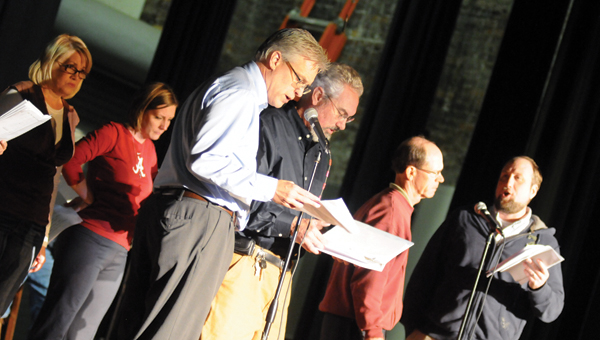 The Greenville Area Arts Council is sponsoring Christmas at the Ritz, a concert performed by the Ritz Players featuring selected Christmas songs. The concert is scheduled for Dec. 8 at 7:30 p.m. at the Ritz Theatre. Pictured, from left to right, are David Norrell, Tom Payne, Tommy Ryan and Kevin Pearcey. (Advocate Staff/Andy Brown)

The sounds of Christmas will soon fill the Ritz Theatre.

Christmas at the Ritz, a concert performed by the Ritz Players featuring selected Christmas songs, is set for Dec. 8.

“This is something that we have talked about for some time, and we finally decided to try it,” said David Norrell, choral director for the Greenville Area Arts Council. “It was one of those things that if we didn’t go ahead and give it a shot, we weren’t ever going to do it. It’s going to be a lot of fun and it’s going to be entertaining.”

According to Norrell, the Ritz Players will perform nearly 20 Christmas songs, accompanied by a live band.

“We’re going to do some of the older Christmas songs, as well as some of the newer ones,” he said. “This is not a cantata. We’re not trying to compete with the churches. We just wanted to take the opportunity to say ‘Merry Christmas’ to all the people that have supported (the GAAC) in the past and this year.”

A portion of the ticket sales from the concert will be donated to the Butler County Department of Human Resources.

The cost of admission is $10 for adults and $5 for students. Tickets can be purchased at The Pineapple.