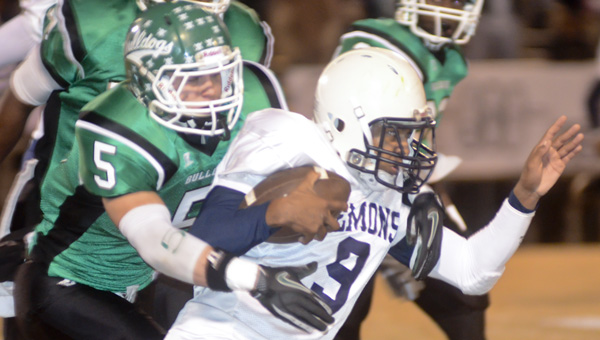 Brantley’s defense helped give the Bulldogs a chance to prove the truth in that as Brantley thumped McIntosh 46-0 in the Class 1A State semi-final to punch a ticket to next week’s championship game.

The defense, which has been stingy all year, took their game to a whole new level by keeping McIntosh not only out of the endzone, but also out of the positive yardage column.

The Demons finished the game with -32 yards of offense and only two first downs: one by penalty in the third quarter and one on a pass with 3:48 left in the game.

“I was real proud of our defense.  I thought we really stepped up,” said head coach David Lowery. “I thought we had a good plan going in, and the kids really executed it well.”

“We played a lot of people on that side of the ball tonight, and everyone we put in made plays, so that’s when it’s fun,” he added.

Fittingly, the defense scored Brantley’s first points of the night.

The Bulldogs’ pressure got to McIntosh deep in the Demons’ territory, and Taylor Driggers came away with a safety to put Brantley ahead 2-0.

The Bulldogs followed that up with a scoring drive that was kept alive by runs from Andrew Parker and a key catch from Clay Haws.

Quarterback Andrew Lowery punched it in from a yard out to make the score 9-0 with 6:10 to go in the first quarter.

On the Bulldogs’ next drive, Nedarius Howard came up with a catch on fourth and nine to put Brantley at McIntosh’s 10-yard line.

Lowery found O.J. Guice, who made up for an earlier dropped pass that could have gone for a touchdown.

Guice was ruled to have possession in the endzone before losing the ball and Brantley extended the lead to 17-0 after a two-point conversion. 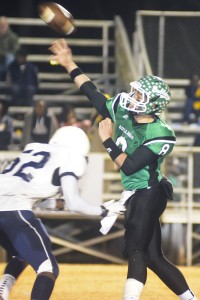 Quarterback Andrew Lowery throws a deep pass before being hit. Lowery had three rushing touchdowns and one passing touchdown on the night.

Midway through the second quarter, the defense forced a punt from McIntosh at their own 10-yard line, and Clay Haws took the return over 50 yards down the right sideline for a touchdown.

“I was just focused on catching it at first and all my teammates had good blocks, so it was wide open,” he said.

Lowery added another one-yard touchdown run with under a minute to play until halftime, and Zane Johnson recovered a fumble with 33 seconds left to give Brantley one more shot at the endzone.

The Bulldogs decided to air it out and work on the passing game.

Unable to get it into the endzone, Ryan Harris kicked a 21-yard field goal in the waning seconds to make the score 33-0 at halftime.

“We knew we were going to have to throw the ball because they put so many in the box, so I was proud of the way we threw the ball too,” Lowery said.

In the second half, Douglas Salter Jr. came up with an interception for Brantley, though the offense couldn’t turn it into points.

However, one possession later Lowery found the endzone for the third time on a one-yard quarterback sneak.

Korious Foster put the Bulldogs’ final points of the night on the board with a nine-yard run with 7:23 to play in the game.

The win means Brantley will play defending state champion Marion County in the state title game next Thursday at Jordan-Hare Stadium in Auburn.

Marion County defeated Pickens County 42-41 in the other Class 1A semi-final.

It’s the Bulldogs’ first trip back to the championship since winning it all in 2009.

“It’s pretty sweet,” Lowery said. “You always want to get there.”

“It’s a special time when you go, and it’s going to be real special for the kids,” he added. “I’m proud for them because a lot of these guys have never been, and the ones that did go were freshmen, so they didn’t do a whole lot. They get to play in the big show.” 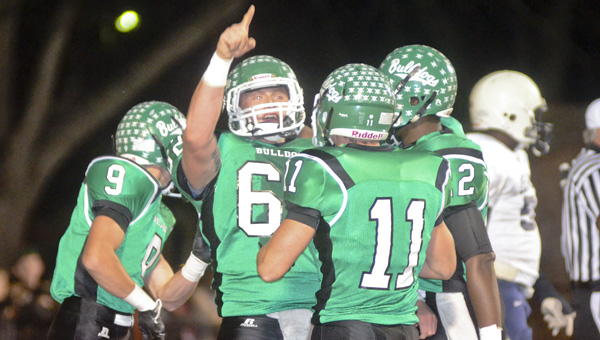 Taylor Driggers, Zane Johnson and other members of the defense celebrate a first-quarter safety.