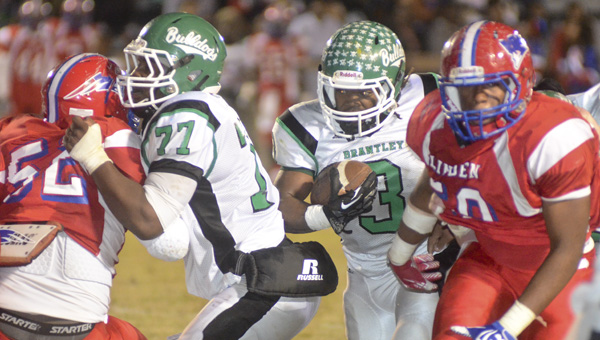 Andrew Parker runs behind the block of Selleven Burnett in Brantley's 20-14 win over Linden.

Despite using a power running game to grind away at Linden, the most important play of Brantley’s 20-14 win over the Patriots was a three-yard pass.

Tied 14-14 with just over six minutes left in the game, Brantley was knocking on the endzone, but faced fourth down and goal from the three yard line.

Nearly every other play on the drive had been a run, but head coach David Lowery called a pass.

“That’s our two-point play, and that’s about where we were,” he said. “I felt good about it because we had run it all year.  That was a good time to run it.”

Quarterback Andrew Lowery connected with Terence Bogen on a slant route for what turned out to be the game-winning touchdown.

“I wasn’t worried,” Bogen said. “I was telling coach that the play was there, and so they ran it, and we converted it.”

While the Bulldogs won the game, the Patriots dominated the first half.

Lowery was intercepted on Brantley’s first possession, and Linden made it inside Brantley’s five-yard line before being stonewalled by the defense.

The offense sputtered, and a short punt set Linden up at the 20-yard line, but again, the defense held the Patriots to a 35-yard field goal attempt, which fell short.

Linden finally scored on a one-yard run with 6:31 left in the second quarter to go up 7-0, which broke Brantley’s run of five straight shutouts.

Coaches often talk about winning being a total team effort, and while the Brantley offense was struggling, the special teams put points on the board on the ensuing kickoff.

O.J. Guice slightly bobbled the kick off, but he picked it up, made a cut to the inside and raced 75 yards down the left sideline for a touchdown that would make the score 7-6 only 15 seconds later.

“I saw a hole to the right that was wide open, so I had to take it for the team,” Guice said.

While Brantley was able to stop the big play from Linden, the Patriots managed to get into the red zone with time running down.

Following a penalty, the Patriots connected on a lob pass from five-yards out to take a 14-6 lead with 7.5 seconds left in the half.

Even though the Bulldogs were still in the game on the scoreboard, the statistics were a little less even.

Brantley went the entire first half without a first down, and according to unofficial totals, Linden out-gained Brantley 174 yards to four.

It was also the first time Brantley had trailed this season, but Lowery said he was confident that his team would come to play in the second half.

“I think we just had to settle down,” Lowery added. “We hadn’t played anybody quite like that on defense, and the speed of the game was a lot different.  We just kinda had to catch our breath and come out and play.”

The defense continued to step up in the second half with Bogen picking off a pass on Linden’s first possession.

Later in the quarter, Guice hauled in a 40-yard pass from Lowery that got the Bulldogs to the 12-yard line.

From there, Andrew Parker scored on a two-yard run, and Lowery made it in for the two-point conversion to tie the game at 14 with 3:54 left in the third quarter.

On the next drive, Linden faced fourth-and-two from midfield, but Brantley’s defense held.

For the rest of the game, the Patriots got a healthy dose of Parker and the Bulldogs’ offensive line.

Brantley pounded the ball between the tackles, picking up at least four yards on every carry.

“When we first tried to come out and run it, it wasn’t working, but we stuck with it and finally pulled it out at the end,” Parker said. “We just kept running where the muscle was.”

That drive not only put the Bulldogs in position for the game-winning score, but it also ran the clock on much of the fourth quarter.

Braxton Barnes came up with an interception on Linden’s next possession, but Linden managed to get the ball back and cross midfield with under two minutes to play.

The win moves Brantley’s record to 13-0 on the season, and the Bulldogs are in the state semi-finals for the first time since 2009.

Brantley will play host to McIntosh next Friday night.