Trail dedicated in honor of Phillips 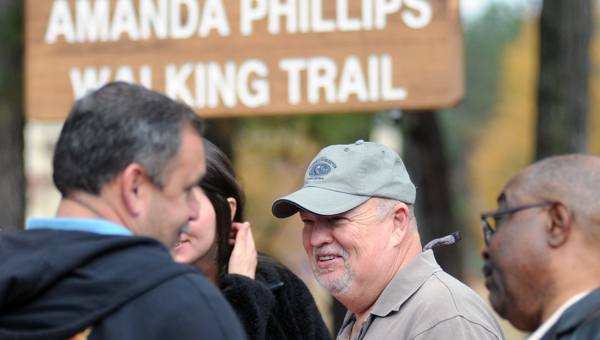 Neal Phillips talks with community members who attended the dedication of the walking trail named in honor of his wife and former YMCA Executive Director Amanda Phillips. (Advocate Staff/Andy Brown)

Neal Phillips couldn’t help but smile as the blue tarp covering a sign at the head of the YMCA’s walking trail fell to the ground.

Amanda Phillips worked at the YMCA for 16 years and served as the executive director of the Greenville YMCA nine years. She passed away on July 1, 2012, just days after retiring from her position at the YMCA.

“I’m just proud that (Mayor Dexter McLendon) did this for her,” Neal Phillips, Amanda’s husband said. “I think it would mean a lot to Amanda. She worked hard to get this trail here, and I hope everyone will come out and enjoy it.”

The trail, which has been covered with finely crushed stone called “crusher run,” spans a quarter of a mile on Watermelon Hill behind the YMCA football field. The total cost of constructing the trail was $10,650. Seventy percent of that cost was covered by a grant from Strategic Alliance for Health, which Amanda Phillips was instrumental in securing.

McLendon said he felt it was important for the City of Greenville to honor Amanda Phillips’ service to the YMCA, and felt that naming the trail in her honor was fitting.

“Amanda loved this YMCA,” he said. “The truth about it is this YMCA was her life. This was an opportunity for the City and the Y community to put something up that will be here forever and honor Amanda. Every time someone passes the entrance to the trail, they’ll see this sign and think of Amanda.”

McLendon said that because of Amanda Phillips’ work in securing the funds for the new walking trail, the City of Greenville is seeking grant funds to create more walking trails, a bike trail and a dog park on the 40 acres surrounding the YMCA.

“If it were not for Amanda and her hard work, this trail wouldn’t be here, and the City might not be looking at doing the things we are looking at,” he said.

Jesse McWilliams, chairman of the Butler County Commission, said he couldn’t think of anyone more deserving of such an honor.

“Amanda was a big, big influence on our community through the YMCA,” McWilliams said.  “She influenced a lot of people, and she’s very much deserving of this honor.”