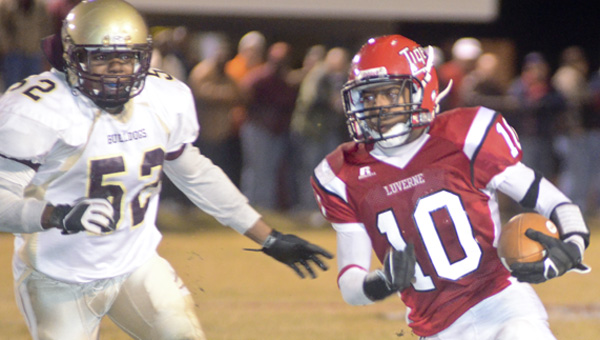 Dontrell Hall scored the only touchdown of the night for Luverne.

Five turnovers spelled disaster for Luverne in a 34-7 second-round loss to Washington County on Friday night.

The Tigers’ first offensive play was a fumble, and that miscue set the tone for the rest of the night.

“Our kids played hard.  They did everything we asked them to do, but we just put the ball on the ground,” said head coach Les Sanders. “Defensively, we didn’t give up any big plays.  We knew they were big, strong and fast.  This time of year, you just can’t turn the ball over.”

That opening turnover led to a Washington County touchdown, and the Tigers looked to answer after converting on fourth down on the ensuing drive.

That drive was cut short at the Bulldogs’ 27-yard line with another fumble, which turned into another touchdown.

The Tigers bobbled the short kickoff and the Bulldogs recovered, however, the Luverne defense held tough.

Quindarius Thagard got in the backfield and made a stop on fourth down to end the drive, but the defense found itself back on the field after the first offensive play resulted in the Tigers’ third fumble of the night.

A touchdown pass put the Bulldogs up 21-0.

Just over two minutes later, the fourth fumble of the half led to a Washington County touchdown with 3.7 seconds left before halftime and a 28-0 lead.

Luverne took the opening drive down and scored on a seven-yard touchdown run by Dontrell Hall, but Washington County responded with another score.

Hall had several strong rushes in the second half, and following an interception by Deshawn Lowery, Luverne drove down the field and threatened to score.

Quarterback Kentrell Jones connected with Kevin Womack for a key third-down conversion, but the Tigers fumbled inside the five-yard line to end the scoring threat.

Washington County managed to keep the chains moving on the ground and ran out the final four minutes of the game.

“Our kids played their hearts out and did what we asked them to do, and I’m proud of them,” Sanders said.

Luverne finishes the season with an 8-4 record.  One of the highlights of the year was an undefeated run through the region on the way to a region championship.

“We lost 15 seniors last year and only had four returning starters coming back.  People didn’t give this bunch a whole lot of chance of doing something like that,” Sanders said. “We went through a lot of injuries and the death of a former teammate, and they just kept on going and playing hard.  They never got down and just kept fighting.  That’s what it’s about — life lessons.  I couldn’t be more proud of these young men.”