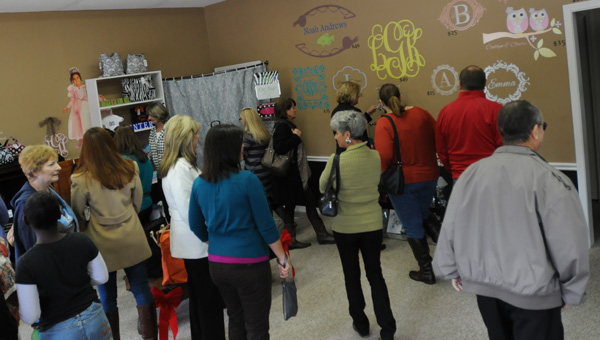 A Greenville business was hit by the mob Wednesday.

The incident, which occurred at approximately 12:30 p.m. at Turned Treasures, was observed by a large number of witnesses.

But this was no ordinary heist or shakedown. The mob was on hand to spend a little cash.

“This is such a cool idea,” said Rachael Stephens, manager of Turned Treasures. “I’m excited to be a part of it, and can’t wait to go and participate when they go to other businesses.”

They being the mob. The Greenville Area Cash Mob to be exact.

On Wednesday, the Cash Mob hit Turned Treasures, a store specializing in monogrammed items, in an effort to help provide a boost to the small business.

“I think it’s great,” Stephens said. “We had one lady come in earlier who said she wanted to come before the Cash Mob because she didn’t think she’d be able to get back to work from her lunch break if she came during the mob, but she wanted to support us.”

So, just what is a cash mob?

It’s a group of people who assemble at a local business at an appointed time and all buy items from that business.

Chad McGriff, who serves on the Greenville Area Chamber of Commerce Board of Directors, said the idea is to help bolster small businesses in the area.

“We all know that locally-owned, small businesses have a tough time thriving,” McGriff said. “We see them come in and go out (of business) in 18 months. This is a way we’re hoping we can give them a boost and be a blessing to them.”

Turned Treasures is the first store in Greenville to be mobbed.

McGriff said the goal is to mob one business a month. Each month, via the Greenville Area Cash Mob’s Facebook page, three businesses will be nominated. The cash mob will then select from those three businesses a store to mob.

“I just think this is an awesome idea,” Stephens said.