Tigers move into second round 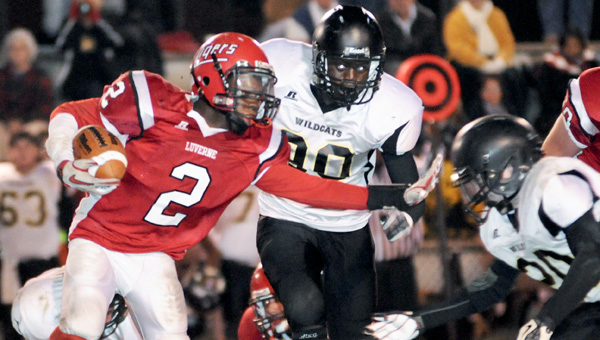 The Luverne Tigers will live to see another night of postseason play after knocking off the Hale County Wildcats 25-13, thanks largely to the Tigers’ defense holding their ground when it counted most.

The Tigers got off to a slow start, however, as an early fumble on the one-yard line gave the Wildcats their first and easiest touchdown of the night, barely four minutes into the first quarter.

Luverne would immediately respond with a 49-yard touchdown sprint from running back Dontrell Hall on his first touch from scrimmage, followed by another from junior Johnathan Chambers to put the Tigers up 13-6.

The Wildcats had their own offensive weapon in running back Cedric Byrd—a force that the Tigers struggled to find an answer to all night.

In fact, Luverne wouldn’t slow him down until well into the second half.

“We saw him all week on film—he’s 6-3, 190 pounds, he runs downhill, and he runs like someone kidnapped his family,” said Luverne head coach Les Sanders. “He’s just a big, tough back, but we lined up right several times on several runs and we lined up a little better in the second half and did a much better job.”

However, the largest factor in the Tigers’ success was several critical defensive stops in critical third and fourth down situations, including an impressive goal line stand before halftime.  After forcing three fourth downs in the same drive, pressure to the quarterback eventually led to a clutch interception from Hall.

The Tigers would come out of the gates running at the start of the third quarter as Chambers shot down the sideline on a 49-yard touchdown sprint, giving Luverne a comfortable 19-6 lead.

A costly fumble on a punt return would give the Wildcats prime field position on the Tigers’ 16-yard line, and Byrd would capitalize on the mistake with a 12-yard surge through a wall of red jerseys for the touchdown.

But it was the Tigers’ secondary that would prove the proverbial nail in the Wildcats’ coffin as Chambers came up big on the other side of the ball with a momentum-stealing takeaway.

“They made a lot of big plays and helped our defense get off the field,” Sanders said.

“On third and fourth down, we preach, as every team does, about getting off the field, and they came through really big for us on some of those deep balls.”

The Luverne Tigers will face Washington County in the second round of the playoffs next Friday night.