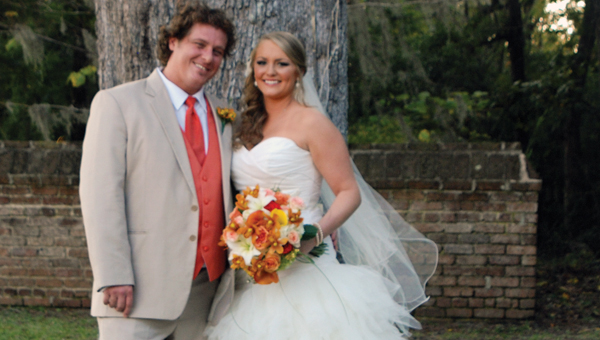 Haley Elizabeth Phillips and Raymond Mason III, of Surfside Beach, S.C., were united in marriage Oct. 6, 2012, at an outdoor evening ceremony held at The Reserve Harbor Yacht Club of Pawleys Island, S.C.  The Reverend Harold P. Lewis officiated the service with traditional readings  from the Bible as well as the Lord’s prayer accompanied by the guests.  Music was provided by David Jacobs, of DJ Productions, and duet by Mrs. Brian Clark and Mr. Chase Clark.  Reception immediately followed at the Yacht Club.

The bride was escorted and given in marriage  by her step-father and her father, respectively.  She is the daughter of Mr. and Mrs. John Skladan of Knoxville, Tenn., and Mr. Bruce Phillips of Georgiana, Ala. Grandparents are the late Mrs. Brenda Bush  and Mr. and Mrs. John Bush of Greenville; Mr. Tony Butts  and  Mrs. JoAnn Butts  of Selma, Ala.; and Mr. and Mrs. William Phillips of Georgiana, Ala.   The bride’s great aunt, Mrs. Michael Shaw,  represented  the grandmother of the bride and was honored the traditional grandmother’s tussy in memory of her late sister,  Mrs. Brenda Bush.

The bride wore an ivory strapless mermaid style, dropped waist ball gown in silky dupione and tulle with a dramatic hand draped bodice and sweetheart neckline.  A matching belt and floral corsage at the natural waist matched the flower corsage worn in her hair.  The full skirt was covered with shredded tulle and finished with a chapel train.  The tulle veil was a handmade gift from the groom’s mother symbolizing the Mason family tradition.  Her bouquet was an exotic, tropical and garden breeze blend of Anthuriums,  Cala lilies, Peruvian and Casablanca  lilies, Cymbidium orchids, Alstroemeria,  Hypericum, and roses in shades of sunset, ivory and green.

Matron of honor was Mrs. Ron Forbes, stepsister of the bride.  Bridesmaids were Ms. Lexie Burling, friend of the bride; Mrs. Angela Clark  and Mrs. Tiffany Smith, both sisters of the groom.  Their dresses were  identical in spice,  chiffon, cocktail length, with spaghetti straps and empire waistlines with satin sashes.  Bridesmaids and mothers bouquets were smaller, but similar to the brides.  Grandmothers were given small tussys.

Best man was Mr. Nick Huckabee, friend of the groom.  Groomsmen were Mr. Frieze Mills and Mr. Jeff Cook, friends of the groom; and Mr. Tyler Phillips, brother of the bride.  All wore taupe tuxes with spice colored  vests and ties.   Boutonnieres  for groomsmen, fathers and grandfathers were made of  crisp  white miniature Cala lilies and variegated pittosporum.

Prior to the wedding, a rehearsal dinner was hosted by the groom’s parents, Mr. and Mrs. Raymond Mason, Jr. at a beach home in Surfside Beach, South Carolina for approximately eighty guests.

The bridesmaid’s luncheon at the Reserve Harbor Yacht Club in Pawleys Island  was hosted by Mrs. Lisa Skladan, mother of the bride.

Our thanks to the following for a perfectly beautiful occasion:  Events on the Half Shell, The Reserve Harbor Yacht Club Staff, The Bridal Boutique of North Myrtle Beach, Jos. A. Bank Clothiers, Peaches & Cream Stationers, CMack Photography and Travis Corriher Photography, Little Shop of Flowers,  Perfect Reflections Salon and Makeup, DJ Productions, Hotz Rentals, Sarah’s bakery, our family and friends.

After a honeymoon in Costa Rica, the couple resides in Surfside Beach, S.C.