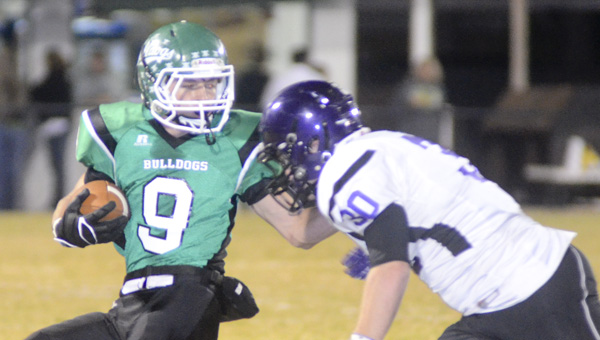 Clay Haws attempts to shake off a Fruitdale defender.

Fruitdale looked to earn their first playoff victory since 1995 against Brantley on Friday night, but the Bulldogs quickly ended any hopes the Pirates had of pulling the upset.

The Bulldogs put 28 points on the board in the first quarter on the way to a 62-0 victory.

Brantley also showed balance, scoring in all three phases of the game.

Brandon Walker put the first points on the board with a touchdown run, followed by a 69-yard punt return for a touchdown by OJ Guice and a 40-yard interception return by Walker.

Demarcus Johnson recovered a fumble for Brantley and the Bulldogs converted a fourth-down-and-short situation into a 15-yard touchdown run for quarterback Andrew Lowery to take a 28-0 lead near the end of the first quarter.

Before the half was over, Andrew Parker had a touchdown run set up by Zeth Johnson, Korious Foster had a two-yard score, and Lowery found Nedarius Howard for a 32-yard touchdown pass.

“Obviously we were heavily favored, and we wanted to come out and take care of business in the first half and get everybody in the second half, and try to avoid injuries,” said head coach David Lowery. “But it looks like we didn’t do that.”

Guice and wide receiver Terrence Bogen didn’t dress out in the second half of the game, and Lowery said both got hurt in the first half.

Next week will be a short week for the Bulldogs with Monday being a holiday for Veterans Day.

“It’ll give the kids a little more time to rest, but it won’t affect me much,” Lowery said.

The Bulldogs will face off against Billingsley next week in the second round.