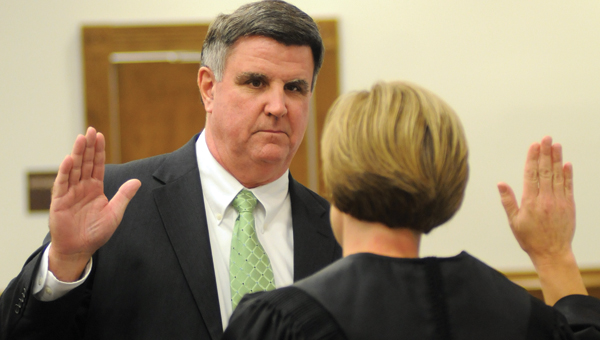 “This is a special night,” McLendon said. “We’ve had a lot go on (in Greenville) the last 12 years, and we’re going to have a lot more going on the next four years. It’s going to be fun.”

Prior to the officials being sworn in, the City showed a PowerPoint presentation that highlighted the changes McLendon mentioned in his opening remarks.

McLendon credited the City’s department heads and workers for many of the improvements that have taken place in recent years.

“It may be the council that makes the decisions, but it’s the department heads and the folks that work for them that make it work,” he said.

Bell, who will once again serve as mayor pro tempore, said it’s the people that call Greenville home that make it a great city.

Lewis, who is beginning his 29th year on the council, said he was thankful to have the opportunity to continue to serve his hometown.

“I am a Greenvillian,” he said. “I’ve lived here my whole life except for a little while during my time in the service and in school, and this has always been home. I will always be a Greenvillian, and I’m very thankful that the people in my district have elected me to represent them again.”

One of the first acts of the newly elected council was to appoint liaisons for the city departments.

The full council will serve as the finance liaison.

McLendon will also serve on the Southeast Alabama Gas District Board and Lewis will serve on the Wtaer Works and Sewer Board.

The council will hold its next regular meeting Tuesday at 5:30 p.m. at City Hall.