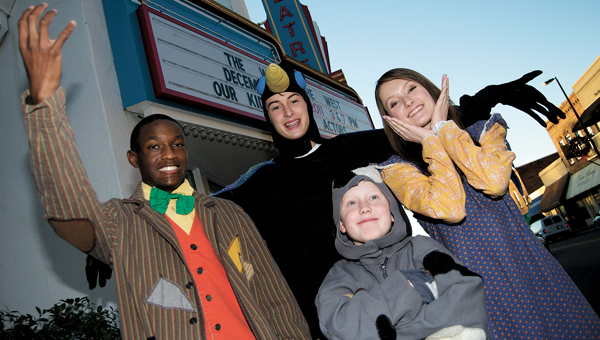 A little red truck will be pulling into the Camellia City Monday filled with nearly everything needed to stage a full-scale musical production.

The only thing that will be missing is the cast.

For the second straight year, the Missoula Children’s Theatre will cast children from Butler County to stage a musical at the Ritz Theatre. The children will be cast into roles on Monday. On Saturday, they will hit the stage for the performance.

“This is a professional children’s theater group that travels the world bringing the shows into communities like ours,” said Nancy Idland, executive director of the Greenville Area Arts Council. “They come into our community, audition our young people and coach them and train them and direct them in to doing a show. It’s a great opportunity to learn about the theater and what goes into putting on a show.”
This year, the Missoula Children’s Theatre will be performing “Hansel and Gretel.”

The group will cast approximately 50-60 first through eighth grade students. There is no guarantee that every student who auditions will be cast for the performance, but there are also opportunities for students to assist with behind-the-scenes jobs such as lighting and makeup.

Auditions will be held at 4 p.m. at the Ritz Theatre. The audition is expected to last two hours, and everyone who auditions is required to stay the entire two hours.

“It’s a very improv audition,” Idland said. “They will actually audition them in groups so no one is uncomfortable, and of course, outgoing smiles, friendly faces and enthusiasm gets the part.”
The first rehearsal for the show will begin approximately 15 minutes following the auditions.

Rehearsals will be held each day with most of the cast members being required to attend all the rehearsals.