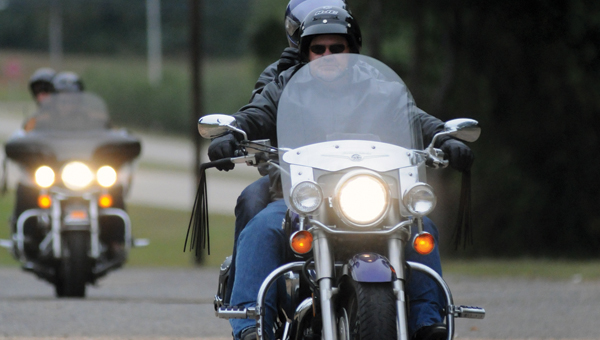 Riders from across the area took part in the first ever Southern Cruisers Riding Club Poker Run for Kids on Saturday. The ride benefited Safe Harbor, which works with law enforcement, the judicial system and the Department of Human Resources to assist children who have been victims of crime or who have witnessed a crime. (Advocate Staff/Andy Brown)

Motorcycles roared from the Butler County Fairgrounds to Andalusia and back on Saturday as riders from around the area took part in the first ever Southern Cruisers Riding Club Poker Run for Kids.

The ride benefited the Butler County Children’s Advocacy Center (Safe Harbor), which works with law enforcement, the judicial system and the Department of Human Resources in Butler, Lowndes and Crenshaw counties to assist children who have been victims of crime or who have witnessed a crime. The total amount raised has not yet been finalized.

“We’re so excited to have finally done this,” she said. “We’ve talked about having something like this for a number of years and the Southern Cruisers stepped up and made it happen. I think for the first year it’s been a great event.”

Danny Foster, who helped organize the event, said there were approximately 25 participants that took part in the ride. He’s hoping that number will climb to 35 to 40 next year.

“It’s a good start,” he said. “We’d have liked to have had more riders, but there was a lot going on with (Old Time Farm Days) and another ride in Demopolis.”

Foster said he also thought the weather kept the numbers down a bit.

On Saturday temperatures hovered around the mid to upper 50s with gusty winds.

“It’s a little cold to be riding,” Foster said with a smile.

On Saturday riders started at the Butler County Fairgrounds where they drew their first of five cards. They then rode to the Amazing Grace Café in Dozier to pick up their second card. From there they made a trip to Jackson Honda for their third card and then cut over to Kayla’s Diner in McKenzie for their fourth card before making their way back to the fairgrounds to pick up their fifth and final card.

In all the riders covered approximately 115 miles.

Along with the ride, the event also featured live music by Troy’s Matt Partridge, door prizes and a silent auction.

Smyth said she felt the event was a success for more than just the money raised.

“For sure every little bit helps, but this also gives a chance to interact with another group in the community that is interested in helping kids and their families, and that’s really exciting,” she said.