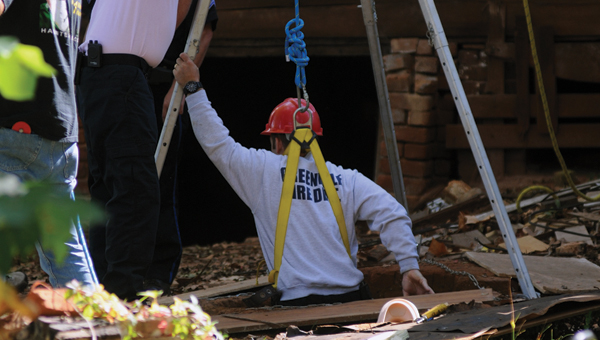 Greenville Fire Department firefighter Micky Norman is lowered into a well behind a house of Cedar Street Sunday afternoon to rescue a 46-year-old man who had fallen into the well. It took firefighters nearly an hour to free the man from the well. He was then transported to L.V. Stabler Memorial Hospital for treatment and later transferred to Baptist Medical Center South in Montgomery. (Advocate Staff/Andy Brown)

Firefighters worked for more than an hour Sunday to rescue a man that had fallen into a well.

According to Greenville Police Chief Lonzo Ingram, Dixon was cleaning up at the house when he picked up a piece of plywood that was covering the well and then tumbled into the hole.

“He didn’t know it was there,” Ingram said. “He picked up the plywood and then got off balance and fell to the bottom of the well.”

“It took a while to get him out,” Phillips said. “He was injured from the fall and couldn’t really do much to help free himself. We lowered two firefighters into the well and treated what injuries we could down there and then harnessed him up and got him out of the well and to the hospital. Thank goodness the well was dry. If not, things could have been much worse.”

Dixon was transported to L.V. Stabler Memorial Hospital before being transferred to Baptist Medical Center South, according to Phillips.

Phillips said he was unsure of Dixon’s current condition.