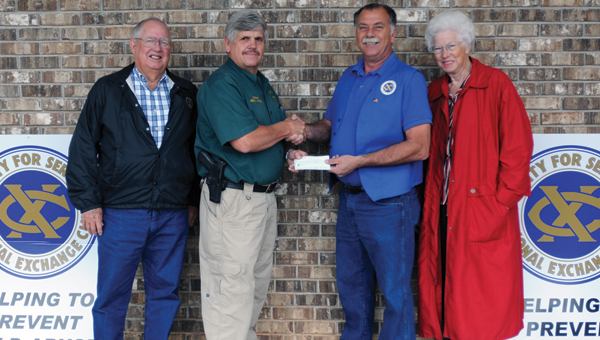 Tragedy struck a Butler County family in April when a 77-year-old man with dementia went missing.

Authorities searched for Billy Heartsill for 10 days before finding his body under heavy brush approximately a half mile from his home on Rocky Road.

Butler County Sheriff Kenny Harden, who led the multi-agency search, is hoping to help other Butler County families avoid a similar tragedy. On Saturday he got some help from the Exchange Club.

As part of the Exchange Club’s “National Day of Service” the Greenville club presented Harden with a check to sponsor the cost of one Project Lifesaver bracelet for a year.

Project Lifesaver is a company that provides training and resources that help agencies, such as the BCSO, search for individuals with Alzheimer’s, autism, Down syndrome, dementia or other cognitive conditions. Citizens enrolled in Project Lifesaver wear a small personal transmitter around the wrist or ankle that emits an individualized tracking signal. If an enrolled client goes missing, the caregiver notifies their local Project Lifesaver agency, and a trained emergency team responds to the wanderer’s area.

Earlier this year the BCSO purchased $5,000 worth of equipment from Project Lifesaver with funds from the annual Butler County Sheriff’s Rodeo and donations from the friends and family of Heartsill.

The bracelets emit a signal that can be picked up for a mile on the ground and five miles in the air. Each bracelet has its own frequency, which can be programmed into the receiver to allow authorities to track the missing person. According to Harden, the BCSO has the equipment to track up to 300 bracelets.

“We want to get these on as many people as possible that need the bracelets,” Harden said. “That way if we have someone missing, we will be able to find them and save a life. Our goal is not to have anyone in Butler County that needs one of these bracelets not have one. If they can’t pay for the bracelet, we’ll find a way to get one on them. That’s why clubs like the Exchange Club are helping sponsor bracelets. We sure do appreciate this donation and it will be a tremendous benefit to this program, which can really help a lot of people in the county.”

Harden said there are currently four Butler County residents that have been issued a bracelet.

He said only those with a documented medical condition such as Alzheimer’s, autism, Down syndrome, dementia or other cognitive conditions will be enrolled in the program.

Anyone wishing to make a donation toward the cost of the program or equipment can send a check to the BCSO. The check should be made payable to Project Lifesaver.