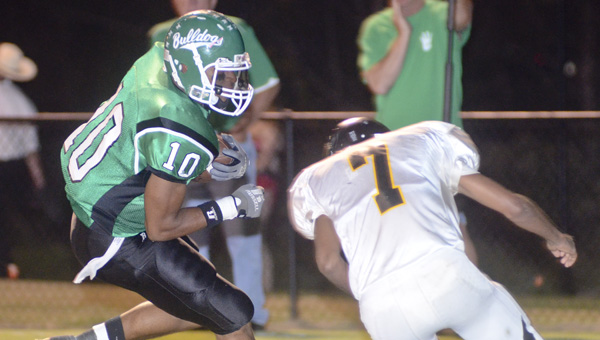 Brantley's Adrian Howard goes in for a touchdown against Red Level.

The Brantley Bulldogs only needed five offensive plays to put four touchdowns on the board in the first quarter on the way to a 55-0 homecoming rout of Red Level.

Quarterback Andrew Lowery hit Terrence Bogen for over 50 yards on the opening play of the game, which went down to the Red Level two-yard line.

Two plays later, Andrew Parker punched it into the endzone for a 7-0 lead.

On the Bulldogs’ second possession, Lowery connected with a wide-open Zane Johnson for a 30-yard touchdown on the first play of the drive.

The defense got in on the action when Taylor Driggers caused a fumble that was scooped up and returned 10 yards for a touchdown by Zeth Johnson to make the score 21-0.

Lowery found O.J. Guice for a 17-yard touchdown pass on the first play of the Bulldogs’ next drive to make the score 28-0 after the opening quarter.

“I was proud of the kids,” said head coach David Lowery. “We had a good homecoming day.  They were doing what they were supposed to do and taking care of business.”

Before the night was over, Adrian Howard, Brandon Walker, Korious Tillis and Xavius Young had all found the endzone for Brantley.

Lowery said that it was good for his younger players to get into the game despite a few penalties in the second half of the contest.

“They needed to play,” he said. “It was good for them to get to play.”

The win marked Lowery’s 150th win as Brantley’s head coach, and he was honored after the game with a signed football.

Next week, the Bulldogs take on the Elba Tigers as the two renew a rivalry.