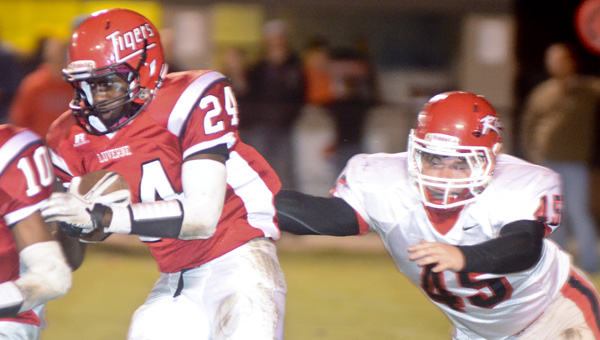 Luverne's Jamarcus June attempts to escape the grasp of a Zion Chapel defender.

Luverne earned a region championship on Friday night, but it didn’t come easily — the Zion Chapel Rebels fought to the end as the Tigers pulled out a 29-28 win.

It seemed as though head coach Les Sanders expected a tough game from the Rebels.

“That’s a credit to Zion Chapel,” Sanders said. “We told our kids they have a good football team — they’ve gotten back healthy and beat a very good team last week by three touchdowns.”

The first quarter was a scoreless one, but barely.

Zion Chapel had first down inside the Luverne five-yard line, but a goal line stand by the Tigers stopped the Rebels’ scoring hopes.

Following a Luverne turnover, Zion Chapel did get on the board with a 63-yard touchdown run by Mickey Cox to take a 7-0 lead.

The Tigers responded with a drive capped by an 11-yard touchdown run by Dontrell Hall for an 8-7 lead.

After a strong punt return by Jamarcus June to the Zion Chapel 32-yard line, June connected with Marcel McMillian for a 27-yard touchdown pass with just over a minute to play in the first half for a 15-7 lead for the Tigers at the break.

“I told them we couldn’t turn it over and had to win the kicking game,” Sanders said. “We didn’t do either of those.”

The Tigers were penalized several times for illegal procedure on the opening second-half kickoff, and a muffed punt gave Zion Chapel the ball at Luverne’s 20-yard line.

“There were also some fundamental things we didn’t do, like containing the quarterback,” Sanders said.

Following that turnover, the Rebels’ LaMarcus Adair looked to pass, but pulled the ball down and scrambled 20 yards for a touchdown to cut the lead to 15-13.

From there, the two teams traded punch after punch.

A 61-yard run from Hall put Luverne in position to retake a 22-13 lead after a nine-yard score from Hall, but Zion Chapel responded with a clock-chewing drive capped by a seven-yard run from Adair to again cut the lead to two points.

Perhaps the biggest play of the game came with Luverne facing fourth and goal from Zion Chapel’s nine-yard line with just under 10 minutes left in the game.

Luverne’s Kentrell Jones found McMillian in the endzone for a nine-yard pass – the game-winning score.

Even though they were down 29-20, the Rebels didn’t quit, and Adair scored on a four-yard run with 38 seconds left in the game.

Brennan Schindler scored the two-point conversion to make the score 29-28, but Luverne fell on the onside kick to end the game and run the clock out.