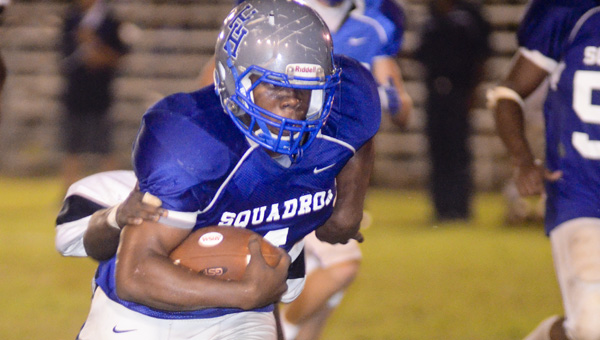 Twice the Highland Home Flying Squadron needed a defensive stand to secure a 20-6 win over Calhoun on homecoming, and twice the defense stepped up, led by Lewis Johnson.

Calhoun jumped out to a 6-0 lead on the Squadron, and the Flyboys didn’t respond until Marquise Randle scored from a yard out with 25 seconds left in the first half.

The extra point put Highland Home ahead 7-6 going into the locker room.

“That score was huge,” said head coach Tom Pinkston. “We were struggling and turning the ball over. We settled it down at halftime and then we started moving the ball.”

Randle said that the team had a long talk at halftime and tried to turn things around in the second half.

“We made a lot of mistakes before halftime,” he said.

The Squadron was poised to pulled ahead midway through the third quarter, but Dee Harris was ruled to have fumbled before crossing the goal line, and the play resulted in a touchback for Calhoun, who promptly moved the ball down the field.

On fourth down and 14 yards to go from Highland Home’s 15-yard line, Johnson came up with a first-down and probably touchdown-saving tackle.

The Squadron responded with a 97-yard drive highlighted by a 28-yard rush by Randle, who ran over, around and through several Calhoun defenders on the way to the 10-yard line of the Tigers.

John Dunn put HHS ahead with a quarterback sneak, but Calhoun threatened again by moving into Squadron territory.

Johnson once again helped make a key play by intercepting the ball at the HHS nine-yard line.

“I was just doing what my coaches said — don’t let them get a first down or get into the endzone, and don’t get beat deep on a pass,” he said. “It feels good to get the win on homecoming.”

The exclamation point came from Randle, who scored his second touchdown of the game on a nine-yard run with under a minute to play.

“Dee Harris made a great backside block on No. 1,” he said. “I don’t think I’d have made it in without that.”

“There were some big plays that helped us, and we finally got it going,” Pinkston said.