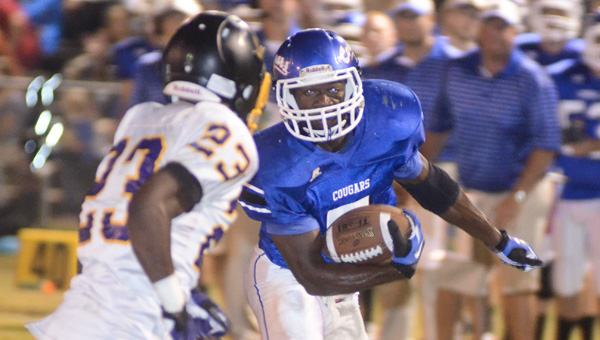 The Crenshaw Christian Academy Cougars clinched a playoff berth with a 49-14 homecoming win over Evangel.

“Everybody got a chance to play, and nobody got hurt,” said head coach Roland Jones.

Several players got a chance to shine in a different role than they normally do — including Storm Worthington.

Worthington, normally a lineman who is listed on the roster at 317 pounds, was put in the backfield in a short yardage situation in the third quarter and broke a 24-yard touchdown run to put an exclamation point on the game.

CCA’s leading rusher was Gavin McKenzie, who carried the ball seven times for 110 yards and two touchdowns, one from 27 yards and one from 31 yards.

Quarterback Steele Jackson rushed for one touchdown and caught another on a pass from Trent McGough.

On the defensive side of the ball, Wooten and Justin Williamson each had six tackles, while Williamson and Ke’Vontae May each had an interception.

Dalton Weeks recovered a fumble, and Joe “the Toe” Smith was seven of seven on extra point attempts.

The win secured a third-place finish in the region, which means the Cougars will be traveling in the first round of the playoffs to Wilcox Academy, who upset Patrician Friday night.