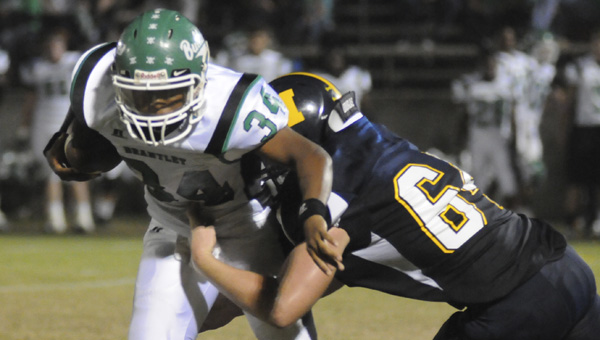 Brantley's Antonio Edwards tries to escape the grasp of a McKenzie defender.

No. 3 Brantley High School found the end zone in just about every way imaginable Friday night en route to a 68-7 win over McKenzie School at Williams-Vickery Field.

The Bulldogs scored at will on offense, found the end zone on an 80-yard punt return and scored on a 70-yard interception return.

The Bulldogs, who are averaging 53 points per game, needed just 15 plays in the game’s opening quarter to build a 34-0 lead over the Tigers.

Junior wide receiver Otis Guice scored on a 17-year run on the first play from scrimmage just 1:05 into the game to get the Bulldogs started. After junior Ashley Haws intercepted a William Brown pass, senior Andrew Lowery connected with Guice for a 36-yard score. The drive lasted just two plays.

Just more than two minutes later, Lowery hit senior Terence Bogen for a 15-yard score on the third play of the drive to give Brantley a 21-0 lead.

Andrew Parker then scored on a 3-yard run and backup quarterback Brandon Walker connected with junior Ken’yada Teague for a 26-yard touchdown to push the lead to 34-0.

Parker added an 80-yard punt return for a score and Bogen intercepted a Brown pass and returned it 70 yards for a touchdown to cap the first half scoring.

“At halftime we talked about fighting on every play, and we did that,” McKenzie defensive coordinator Ezell Powell said. “We didn’t quit. We didn’t give up. Against a team like (Brantley) that’s all you can do. All you can do is give it your all.”

In the second half, Lowery hit Bogen for a 25-yard touchdown, junior Kendrick Owens scored on a 60-yard run and freshman Antonio Edwards found the end zone from four yards out to cap the Bulldogs’ scoring.

McKenzie got on the scoreboard with 3:02 left to play when Brown hit sophomore Terrance Clemmons for a 44-yard touchdown. Oliver Jernberg added the extra point for the Tigers.

“We’ve got things we need to work on, but I’m proud of the way we fought,” McKenzie head coach Miles Brown said.

McKenzie will be back in action next Friday when it hits the road to take on Florala. Brantley will travel to Pleasant Home.