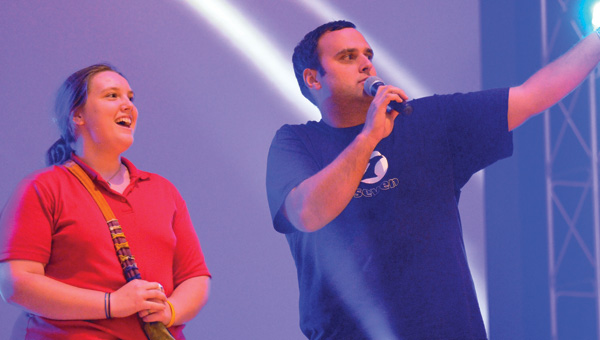 Shelby Heartsill shares her dream of becoming a judge to a crowd of Greenville High School students at an assembly hosted by The Seven Project on Monday. Pictured, left to right, are Heartsill and Seven Project Director Ben Russell. (Advocate Staff/Patty Vaughan)

The students at Greenville High School and Greenville Middle School have big dreams.

This was discovered at The Seven Project that was held at both schools on Monday. A faith-based assembly was held Monday night.

The Seven Project Director Ben Russell also shared his dreams and told the crowd of students how his dream was to be in a band.

“When I was your age, which wasn’t that long ago, I had a dream that I wanted to be in a rock band,” Russell said. “I could rap. I could dance. I can play the drums. I could do all of those things. But dreams kind of change, and one time I got to thinking about this one dream that I could speak to students all around Alabama about better decisions and better choices in our lives.”

In all there were three presentations on Monday. Two of the speakers shared heart-felt stories to help show students and community members the importance of making the right choice in life.

“I knew of a teenager in 10th grade, and as a result of bullying, took her life and she left a suicide note behind and it said, ‘Sticks and stones may break my bones, but your words killed me. Thank you Southwest High School,’” Russell said. “You never know what people are going through at their house. Your words are very, very powerful. Let’s make the right decisions to end up on the right side of the statistic.”

The Seven Project Coordinator Keith Simmons said approximately 250 kids showed up on Monday night for the faith-based session and about 60 made the decision to follow Jesus Christ.

“The schools’ assemblies went well, and everybody received what they had to say,” Simmons said. “It turned out really well in both schools. I believe the presentation was good and the principals said they really enjoyed it.”

Special guests Bryce Eliot, The E-Crew and The Next Level Band performed at the event.

Several churches, community groups and the Butler County Ministerial Association worked to put the event on and hope to bring a similar event to Butler County next year.

“I talk to students all the time and they say, ‘Ben, I hear you talk about making better choices. I hear you talking about not doing drugs. I hear that message about not bullying people. I even hear you talking about dreaming big dreams, but you don’t know me. You don’t know what I have had to deal with in my life,’” Russell said. “Sometimes making good choices and to dream big dreams, means that you have to forgive people that have wronged you. Forgiving others can propel you past making poor choices. It will propel you to dream big dreams.”