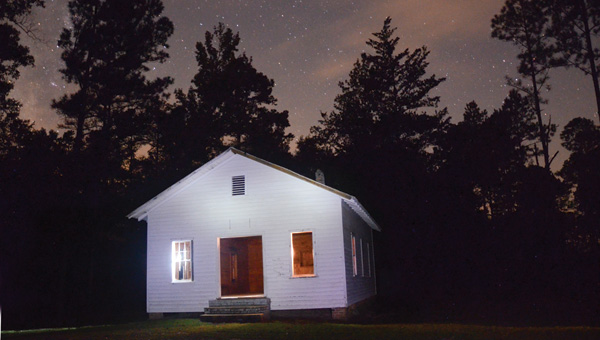 Consolation Church, nestled deep in the woods near the Butler County and Covington County line, has developed a reputation as a paranormal magnet. For years now, stories of banshees, hellhounds, ghosts, ghost riders and even a haunted outhouse at the church have circulated throughout the county, state and even the nation. (Advocate Staff/Michael Rodgers)

Nestled deep in the woods near the Butler County and Covington County line stands Consolation Church.

This country church has gained quite the reputation over the years, but for reasons that may be unexpected. The small wooden church, located in Oakey Streak, has developed a reputation as a paranormal magnet.

For years now, stories of banshees, hellhounds, ghosts, ghost riders and even a haunted outhouse at the church have circulated throughout the county, state and even the nation.

One of the most common legends shared about the church is that of a Gaelic banshee, whose shrieking, sobbing and whimpering can supposedly be heard from the wooden walls of the church, and signaling that someone inside the church would soon die.

Another story claims that hellhounds, with glowing red eyes, roam the cemetery located just in front of the church. The cemetery, which houses graves dating back to the early 1800s is the final resting place of several men who served in the Confederate army. It’s rumored that those who visit the church can hear the sounds of soldiers marching.

But the banshee, or banshees, hellhounds and Confederate soldiers aren’t the only ghosts rumored to haunt the church. There are also stories of two children that haunt the property.

The first is a small boy playing with a ball. Sometimes he appears to those who visit the church. Other times only his laughter can be heard. Legend has it that if the boy, whose presence is accompanied by a sudden cold wave of air, rolls the ball to a person and that person picks the ball up and rolls it back to the boy, that person will soon die.

The second is a small girl. She appears and then skips down the road before disappearing again.

Another story associated with the church involves a black 1964 Ford pickup truck and a ghost rider.

The story goes that if a visitor loiters at the church for too long on the night of a full moon, the truck will appear and chase the visitors. If the truck catches up with the visitors, their vehicle will crash, killing everyone in the vehicle.

The final tale linked to Consolation Church is that of the outhouse that sits just a few yards behind the church.

Legend has it that if someone enters the outhouse, the door will shut and lock behind them, holding them prisoner until someone from outside opens the door.

On Wednesday night at approximately 8 p.m., reporters with the Greenville Advocate ventured out to Consolation Church, with the permission of the owners of the property, to explore the stories surrounding the church.

After spending more than an hour on the property — strolling through the cemetery, sitting inside the church and even stepping inside the outhouse — the reporters failed to see the glowing red eyes of the hellhounds, a small boy or girl, or the black 1964 Ford pickup truck.

The reporters also didn’t hear the screaming of banshees or the marching of Confederate soldiers.

The tales associated with the church appear to be nothing more than urban legends passed down from generation to generation to entertain the listener.

However, the stories have proven costly for the church, which has suffered more than its share of vandalism as a result of those looking to spend a spooky night on the property.

The door to the church has been removed. The windows that have not been boarded up previously have shattered glass clinging to their frames.  The pews have been removed from the building and burned, and the wooden floor of the church is stained with a pentagram reportedly painted there by a group of teenagers.