Luverne falls on the road at Pike County 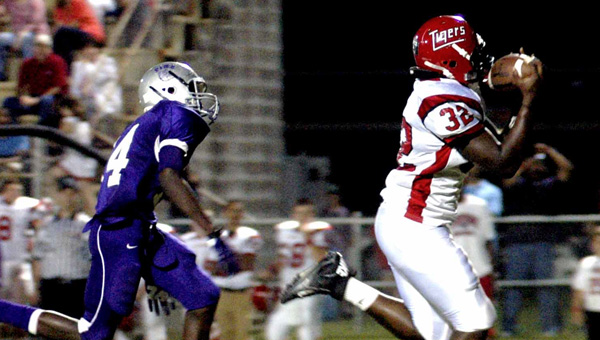 By Wes Johnson
The Troy Messenger

Turnovers proved costly for Luverne in a 21-7 loss to Pike County High School on Friday night.

“When you turn the ball over and in translates into big plays for them, this is what happens,” Luverne head coach Les Sanders said. “It’s not due to lack of effort on our guys’ parts, we just have to hold on to the football.”

Late in the first quarter, Pike County took over on the Tigers’ 40-yard line after the first turnover. Raheem Pearson took the handoff and raced 40 yards to put the Bulldogs ahead, 7-0.

It didn’t take Luverne long to respond as, on the ensuing drive, quarterback Kentrell Jones found Quindarius Taggard for a 31-yard strike to tie the game.

Luverne (3-2, 3-0) pinned Pike County at its own 10 midway through the second quarter. On the first play of the drive, Pearson scampered 86 yards to put the Bulldogs in striking distance at the Luverne 4. Two plays later, Kamari Jackson found the end zone. The extra point was blocked and Pike County led 13-7.

Pearson finished with 190 yards on 16 carries.

The Bulldogs took complete control when Luverne fumbled two play in to its next drive. Stevie Smiley scooped up the loose ball and returned it 40 yards for the score. Pearson converted the two-point conversion giving Pike County the two-touchdown advantage.

Pike County would hold off the Tigers offensive counter attacks in the second half to preserve the victory. The decision marks the first victory for the Bulldogs over Luverne since 1999.

Luverne’s Dontrell Hall turned in a solid defensive performance. The defensive back thwarted two Bulldog drives with interceptions at the 2-yard line and in the end zone.

Jamarcus June rushed for 91 yards on 17 carries for the Tigers.