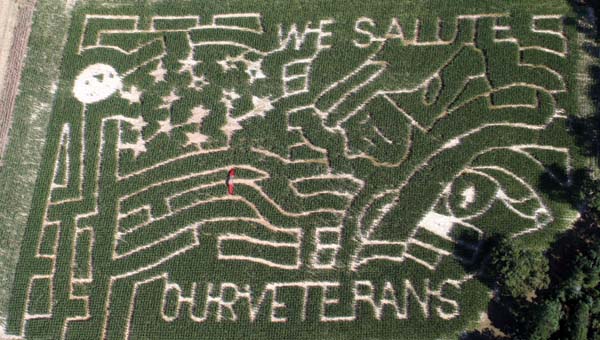 The theme for this year’s corn maze at Daybreak Farms is “We Salute Our Veterans!” (Submitted Photo)

The corn has grown tall, the paths have been laid and the hay bails are piled high for the annual Daybreak Farms Corn Maze Adventure that opens Saturday.

This year’s theme, “We Salute Our Veterans!” was something that hit close to home for owner Tom Duncan.

“The theme came because my son was a ‘Blue Spader’ in Afghanistan and we sent all the boxes over there,” Duncan said. “This year our maze is two mazes again with the American flag and the second with the combat soldier with the blue patch on his shoulder.”

The Blue Spaders are the 26th Infantry of the 1st Division of the United States of Army.

Beyond the maze, Duncan hopes to take donations for the Wounded Warrior Project this year.

Other activities will surround the maze again this year like the large hay mountain, the pedal cart track, the pedal tractors, the corn box and the animal barn.

New features that have been added include large jumping balls to race around a track, a 100-foot slide on a steeper hill, a pumpkin shed at the entrance and a smaller version of the hay bail stack for children.

A bridge has also been added in the maze for people to walk over and get a glimpse of a picture.

The party barn will also be available for those interested this year and schools have already started lining up to make trips to the maze.

“We have schools from Autauga, Montgomery, Lowndes, Pike, Covington and Monroeville,” Duncan said. “We have schools booked from every county within a 60-mile circle coming this year.”

Duncan estimates about 1,000 students will be entering the maze this year.

“We’re covering a lot more ground,” Duncan said. “It’s bigger, spread out and more open, and we will keep them all busy and everyone should leave here very tired.”

On Oct. 13 the maze will also be bringing in a hot air balloon from Touchstone.

The admission charge will cover everything except the corn cannon and the cow train.