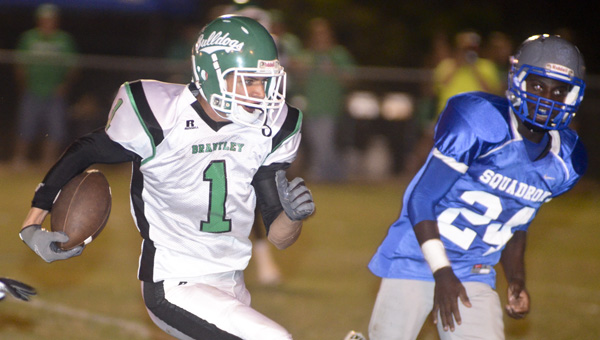 If Friday night’s game between Brantley and Highland Home was a boxing match, the Bulldogs came out with a haymaker and the Squadron never recovered.

Brantley put two touchdowns on the board in the first four minutes of the game and cruised to a 53-12 win.

BHS head coach David Lowery said you never expect to get off to such a fast start.

“We had a big play early and then a turnover and it was 12-0 pretty quick,” Lowery said.

The big play he was referring to was a 55-yard touchdown pass from Andrew Lowery to Nedarius Howard less than a minute and a half into the game.

The turnover came from a fumble on the ensuing kickoff, which set Brantley up at the Highland Home 17-yard line.

Despite the Squadron defense stepping up, the Bulldogs’ Andrew Parker punched it in from two yards out to put Brantley ahead 12-0 with 8:12 left in the first quarter.

“They’re a good football team, and we made mistakes early right out of the gate,” said Highland Home head coach Tom Pinkston. “Then we just didn’t respond very well.”

Brantley built on their lead on the following drives, with a long run by Parker setting up a five-yard touchdown run by Adrian Howard and OJ Guice scoring on a 17-yard run to make the score 25-0 with eight minutes left before halftime.

The Squadron showed signs of life as quarterback John Dunn hit Quin Posey to make it into Brantley territory, and Dunn launched a bomb on the following play that Posey again hauled in at the four-yard line.

Dunn scored from a yard out to make the score 25-6, but Brantley came back with two more scores before halftime.

After a penalty negated a touchdown by Braxton Barnes, Ken’yada Teague scored from 13 yards out, and with less than a minute to go in the half, Lowery found Guice for a 27-yard touchdown pass to make the margin 39-6 at the half.

One of Brantley’s second half touchdowns came on a 60-yard punt return by Barnes, and Korious Foster had a two-yard run for a 53-6 lead.

Following a strong kick return by Tristan Price, Lewis Johnson broke a 35-yard run for the Squadron’s other score of the night.

Seven different players scored touchdowns for Brantley, something that Lowery said may help his offense in future games.

“It makes it hard to pick out one if everyone’s doing well,” he said. “It’s something you try to do.”

On the other sideline, Pinkston said his team has a lot of growing up to do before stepping back into region play next week.

“We’re going to have to pick up the pieces and try to get back ready, because we’ve got four in a row,” he said.