Killough murderer up for parole 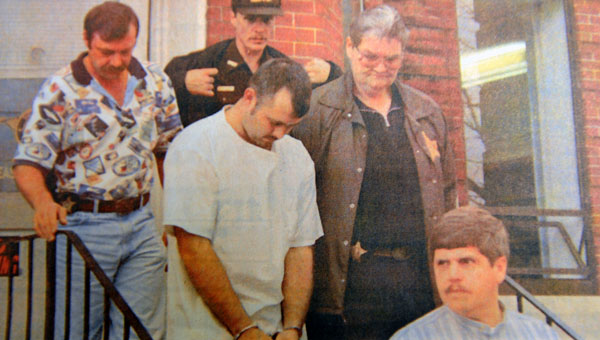 Thomas Wesley Smith was convicted of the 1997 murder of Tracy Lowery Killough. He is pictured here being led out of the Butler County Courthouse for a bond hearing. Smith will have a parole hearing Tuesday. (File Photo)

Butler County Sheriff Kenny Harden called it one of the most brutal crimes he has ever investigated.

More than 15 years later, it’s a case that he can still recall with vivid detail.

“It’s the kind of case that sticks with you,” he said. “It’s one that I will never forget.”

Harden, the BCSO chief investigator at the time, was one of the first officers to respond to a call reporting a breaking and entering with injury on County Road 38. What authorities found when they arrived on the scene was a murder.

Tracy Lowery Killough stabbed to death in an upstairs bedroom of her Shackleville Community home.

It was approximately 9 a.m.

According to Harden, the murderer had stabbed Killough more than 20 times.

“Mrs. Killough had taken one of her children to school, and when she returned home, we think she interrupted a burglary,” Harden said. “Her daughter, who was about five at the time, heard the altercation and went upstairs where she found her mother.”

The girl ran out of the house and sought help from a group of contractors who were adding a garage onto the house. The men rushed inside, saw the body and called the Greenville Police Department.

“After the little girl came outside and got the workers, they noticed a man jumping over the fence,” Harden said.

Just less than three hours later, authorities arrested Thomas Wesley Smith after his truck broke down on County Road 17. A description of a vehicle matching Smith’s truck was given to authorities by witnesses that saw the truck near the home earlier that day. Authorities also found a hunting knife, rifle and other evidence in the pond on Killough’s property linking Smith to the murder.

Smith was charged with capital murder. On Aug. 23, 1999, he accepted a plea deal that downgraded the charge to murder and burglary. He was sentenced to 90 years for murder and 15 years for burglary. Under the deal, Smith agreed that he would not seek or accept parole for 30 years.

On May 23, 2007, Smith had his first parole hearing. Parole was denied, but a second hearing was scheduled. That hearing will be held Tuesday.

Jenny Killough, Tracy’s mother-in-law, said that each time Smith comes up for parole, it forces the family to relive the murder.

Butler County District Attorney Charlotte Tesmer, who tried the case in 1999, said Smith has not held up his end of the deal forcing authorities to examine their options, which could include retrying Smith for capital murder.

“The first time he came up for parole I was not with the DA’s office, but I met with the family and the Attorney General’s Office and brought up the possibility of withdrawing the deal and retrying the case as a capital murder case,” Tesmer said. “We still have that option. If he is granted parole, we will look at trying the case again, but our best course of action is not to let him out.”

Tesmer and Harden both plan to attend the parole hearing and argue that Smith should serve his full sentence.

“The murder was very brutal, and I don’t like the idea of him getting parole even coming up,” Harden said. “I’ll do everything I can to make sure that he doesn’t get out. As long as I’m able to fight (Smith getting parole), I’ll fight.”

Both Tesmer and Harden agreed that withdrawing the deal and retrying the case would be a difficult proposition given the amount of time that has passed since the murder and the turnover within the agencies that participated in the investigation.

“He admitted to the murder in court,” Harden said. “If we take away the deal and retry the case, then he is innocent until proven guilty. Right now, he’s guilty. I believe the best thing we can do is fight to make sure he doesn’t get out. He deserves to serve all 105 years of his sentence.”

Tesmer believes that Smith will once again be denied parole.

“I don’t see him getting out,” she said. “I’m going to do everything I can to make sure he doesn’t.”

Smith’s possible parole will be considered by the State of Alabama Board of Pardons and Paroles at 8 a.m. Tuesday. The hearing will be held at 301 S. Ripley St. in Montgomery.