Student loving life in the States 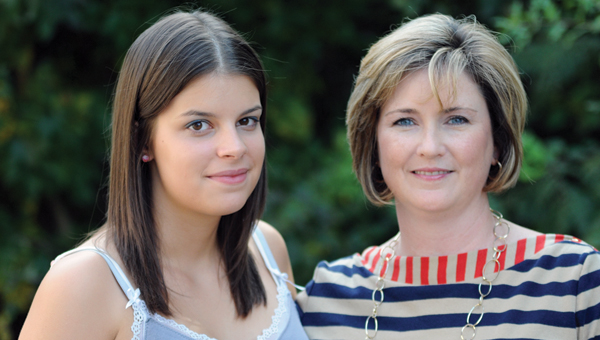 Iva Gavrilovic, left, is spending her junior year of high school in the Camellia City has part of an exchange program. She is living with Evelyn Causey, right. (Advocate Staff/Andy Brown)

One would expect that moving to a country nearly 5,600 miles away from home would present certain challenges — a new language, strange foods and unfamiliar customs to name just a few.

Iva Gavrilovic has tackled each of those with ease. However, the 17-year-old Serbian exchange student’s transition to life in the Camellia City hasn’t come without its challenges.

“Finding a dress for homecoming has been so hard,” she said with a smile. “In Serbia our dresses aren’t so dressy and I just can’t picture myself in any of the dresses we’ve looked at, and we’ve looked at a lot of them.”

Despite the challenge of finding just the right dress, Gavrilovic, a junior at Fort Dale Academy, is looking forward to attending the school’s homecoming game Sept. 28.

“I don’t know exactly what homecoming is, but I’m excited about it,” she said. “I’m sure it will be fun.”

It’s that attitude that has made her transition to life in the United States so easy, said Evelyn Causey, Gavrilovic’s host mother.

“She’s adapted so well,” Causey said. “She enjoys people so much and has really embraced trying new things. I think that’s made her transition easier.”

Gavrilovic, the baby of her family in Serbia, admits that she misses her parents and brothers, but that her “American family” has made it easier to be away from home.

“It’s been lovely,” Gavrilovic said. “I love my family. They are so sweet and funny. It’s important that they are funny. Of course I miss my family at home, but my family here is so great. I really enjoy spending time with them.”

The feeling is mutual.

Causey said her family couldn’t have hoped for a better fit in an exchange student.

“We’ve loved having Iva as a part of our family,” said Causey, who is hosting an exchange student for the first time. “We were intrigued by the program and thought it would be a great cultural experience for our family, especially our daughter Jess who is nine. We realize that we are such a small part of the world and thought this would really open our eyes to other cultures and life experiences. Iva has been a great ambassador for Serbia with a positive attitude and enthusiasm to learn about America. Hosting was definitely the right decision for us.”

Gavrilovic came to the United States with A-SMYLE (American-Serbia & Montenegro Youth Leadership Exchange). The program, which was established in 2005, has sent more than 300 students between the ages of 15 and 17 to the United States to study at high schools across the U.S. and live with American host families.

Gavrilovic became interested in the program as a freshman in high school.

“My first year in (high school) I saw a signup sheet for the program and I said then I was going to sign up,” Gavrilovic said. “Then I found a boyfriend, and I was so attached to him, I didn’t sign up, and I regretted it later. So when I saw the signup sheet the next year, I decided I was signing up for sure.”

She did, and that’s when the real work began.

To be accepted into the program, Gavrilovic had to pass a two-part English test, a physical and a personality test.

“It was a long process, but it was worth it,” she said. “I was so excited when I found out I had been accepted. I’m still excited.”

In a just a month, Gavrilovic has already experienced several firsts, including a high school football game, tubing at Lake Jordan and shopping at Target.

“I was amazed that the stores were so similar,” she said. “We went to one Target not long after I arrived, and a little later we went to another one. I told Evelyn we had already been there, and she told me it was not the same store, but they are so much alike. It was strange.”

Today, Gavrilovic will experience another first when she attends Auburn’s game with Louisiana-Monroe.

“I think it will be fun,” she said. “I don’t understand the game at all, but I love Auburn. I already chose my side.”

Gavrilovic and the Causeys also have a trip for Disney World planned.

But for Gavrilovic, the real treat is having the chance to live in the United States and build relationships with her host family and fellow students.

“I love it here,” she said. “I think it’s a great fit for me. Everyone has been so nice and friendly, and I’ve enjoyed getting to know everyone. It’s been so much fun.”

Fort Dale Academy senior Christen McKeague is one of 16,000 students nationwide who was named a semifinalists for the 2013... read more