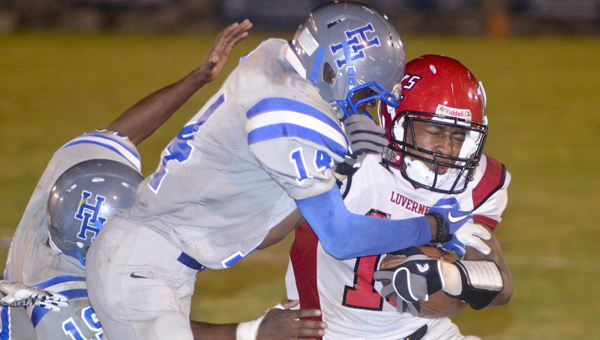 In a contest dictated by defense, it was fitting that Luverne’s Dontrell Hall sealed the game with a interception with just over a minute to play to give the Tigers a 20-16 win.

“This was a great high school football game,” said Luverne head coach Les Sanders. “You had two teams playing their guts out.  Coach Pinkston and his staff do a great job, and we knew it was going to be like that.”

“You’ve got to give credit to Luverne,” said Highland Home head coach Tom Pinkston. “They do what their coach and they do a good job of what they do.  We just fell a little short.”

The game was physical from the start, and both teams looked to capitalize on the other’s mistakes.

The Squadron drove into the red zone near the end of the first quarter, but a fumble led to a fourth down and 17 that they were unable to convert.

Once again forced into a fourth-down situation, quarterback John Dunn threaded the needle and hit Lewis Johnson for a 20-yard touchdown pass.  Johnson added the two-point conversion for an 8-0 lead.

Unfortunately for the Squadron, that lead was short-lived.

The ensuing kickoff went out of bounds, and Luverne forced HHS to re-kick.

On the second attempt, Jamarcus June fielded the ball at the 15-yard line, caught a couple of blocks in the middle of the field, and went 85 yards for the touchdown to cut the lead to 8-6.

June played a key role in Luverne’s next touchdown, as he caught a swing pass from Womack on fourth down and tight-roped 21 yards for a score to make it 14-8 with 2:10 left before half.

The Tigers got one more shot before the quarter ended, and Kenterius Womack connected with his brother Kevin Womack for a fourth-down conversion at the three-yard line with 13 seconds to play.

Luverne has been battling injuries all season, but Pinkston said the Squadron had to make mid-game adjustments.

Pinkston said Johnson had trouble with asthma and sat out the second half, which led to some shuffling of players at different positions.

“We just weren’t able to put it together,” he said.

Despite the adversity, the Squadron came out in the second half prepared to make a statement, and behind the hard-nosed running of Marquise Randle and Dunn, who scored the Squadron’s second-half touchdown with seven minutes left in the third quarter.

Randle lowered his head for the two-point conversion and cut the lead to 20-16.

From there, it was a game of defense for both teams.

Luverne was driving down the field, but a hard hit on June forced a fumble that was recovered by Highland Home.

Midway through the fourth quarter, the Tigers faced fourth and two from Highland Home’s 20-yard line, and Jordan Roll led a charge along the defensive front that stopped Luverne and forced a turnover on downs.

The Squadron fumbled, and Luverne was poised to capitalize on that mistake with another touchdown, but the HHS defense stood tall again.

HHS’s Tay Fuller had a number of key catches for the Squadron, but the last-minute turnover sealed the game for Luverne.

“We were give out, but we gutted it out and that’s what this game will teach you,” Sanders said.

While the Tigers were able to pull out the win, Pinkston said he felt like his team had its chances.

“Just one play here or there, and we might have had it,” he said. “Luverne played hard.  We just fell a little short.”

The win moved Luverne to 2-0 in the area, while Highland Home dropped to 1-1. 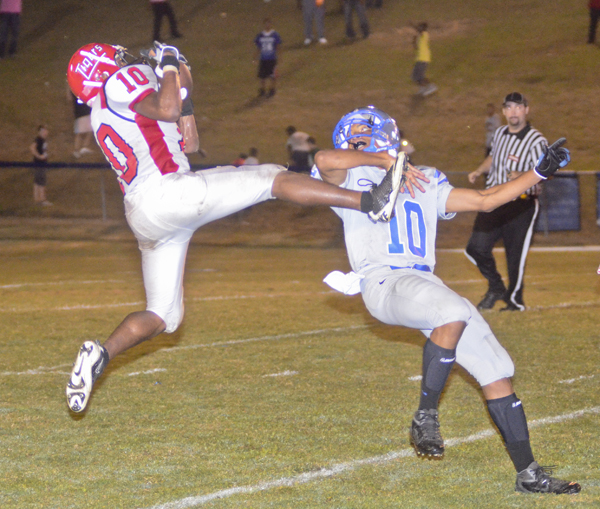 Luverne's Dontrell Hall intercepts a pass intended for Highland Home's David Rogers to seal the win for the Tigers.