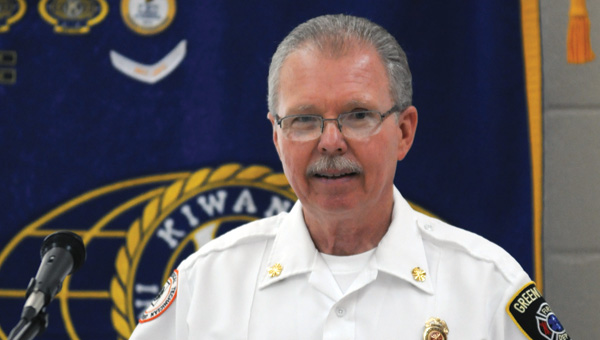 That was Greenville Fire Department Chief Mike Phillip’s message to the Kiwanis Club Tuesday on the 11th anniversary of the Sept. 11, 2001, terrorist attacks.

Phillips said in the wake of the 2001 attacks, the training firefighters receive has changed drastically.

According to Phillips, firefighters no longer train to merely put out fires. They train to respond to terrorist attacks of all kinds.

“The truth is we don’t know what kind of disaster or emergency situation we are going to have to deal with,” Phillips said. “We never know what’s going to happen next, but as firefighters and police officers, we are responsible to be the first line of defense for our community. The Greenville Fire Department, the Greenville Police Department and the Butler County Sheriff’s Office are a team, and we try to provide the best protection for our community that we can.”

Another example of how things have changed following the Sept. 11 attacks is the Greenville Police Department’s Special Response Team.

The events on Sept. 11, the death of a Greenville Police officer and a separate officer-involved shooting led to the formation of the team.

“Because of those events, our local officials saw a need for a specially trained group of officers to respond to events that might happen here in the city,” said Lt. Justin Lovvorn, SRT team leader. “There was a need to have officers that were already trained and had the resources to go into action instead of just containing a problem and waiting for help to arrive.”

The team was formed in the summer of 2005, and responded to a shootout at the Comfort Inn in January of 2006.

“Before (we had the Special Response Team) we would secure the perimeter and wait for the state’s team to come assist with the situation,” Capt. Randy Courtney, SRT commander, said. “Those guys are scattered all over the state and it could take up to six hours for them to get to the scene.”

All 10 members of the unit are state certified, including Greenville firefighter Jason Pouncey, who is also a trained paramedic.

“Because of our training we have handled a number of situations here with a great outcome,” Lovvorn said.

Kiwanis Club member Kathy Smyth, who served as the host for Tuesday’s program, acknowledged the role of the Greenville Police Department, the Greenville Fire Department and the Butler County Sheriff’s Office in the community.

“On the anniversary of the attacks, we want to recognize our own first responders,” she said.

“When everyone else is rushing out, they are rushing in. We’re thankful for their service to our community.”