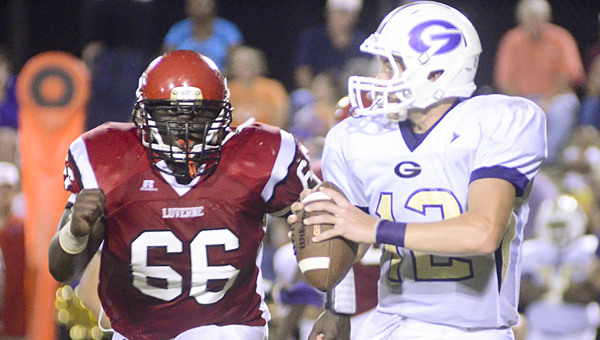 Goshen quarterback Ramsey Rigby rolling out while Luverne's K'Deem Hamilton chases him down.

After Goshen held it close for a half, the Luverne Tigers used a strong third quarter and several big plays to pull away from the Eagles and win 40-13.

On the opening play of the game, quarterback Kenterius Womack connected with Kevin Womack, who made a diving catch with his fingertips for a 40-yard gain down to the Goshen 24-yard line.

The Tigers’ drive stalled, but on fourth down and eight, Womack found Jamarcus June on a throwback screen for a 22-yard score.

Dontrell Hall added the two-point conversion to make it 8-0 in favor of the Tigers.

June added a 26-yard run and 14-yard run to a drive late in the first quarter, and Hall capped it off with an eight-yard run for a score.

Goshen threatened to come back following a steady drive down the field for a touchdown, but Tigers, along with the tandem of June and Hall, responded.

June broke a 47-yard run, and two plays later Hall spun through a number of tackles and scored from 27 yards out to make the margin 20-7.

“I felt like in the first half that Goshen was a little more excited to play than we were,” said head coach Les Sanders. “At halftime I told them that I felt like we need to be more physical, and I thought we did.  Our tempo and intensity need to pick up, and I thought in the second half we did a lot better job of that.”

A safety and good field position on the ensuing drive in the third quarter helped Luverne blow it open.

Womack turned in a 37-yard touchdown run, which was the Tigers’ shortest scoring play in the second half.

June broke a 70-yard run for a touchdown, and Marcell McMillian had an 89-yard touchdown run called back for holding.

Sanders said he felt like his team had a chance for some big plays due to Goshen’s defensive scheme, and some key blocks made those plays possible.

“We also had some great individual efforts,” he added. “We had some good blocks, but after 10 or 15 yards it became a one-man show.”

The Tigers went scoreless in the fourth quarter while Goshen added a late touchdown.

“It feels good to get a win,” Sanders said.