Pro-Law Am ‘a success’ 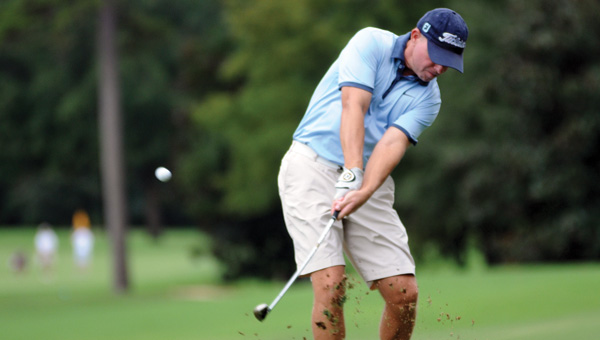 Steve Brown hits his approach shot during the 14th annual CorStone Pro-Law Am. The tournament, which raises funds for the Butler County Children’s Advocacy Center and the Fraternal Order of Police Lodge No. 39, was played Wednesday at Cambrian Ridge. (Advocate Staff/Patty Vaughan)

Golfers from across the state turned out Wednesday to tee it up for the 14th annual Pro-Law Am golf tournament.

The total amount of money raised by the event has yet to be calculated, but Butler County Children’s Advocacy Center Director Kathy Smyth said the tournament was a success.

“It was one of those years where nothing seemed to go right the week before, but the day of the tournament everything came into play and it turned out to be quite a success,” Smyth said.

Susan Rhodes won $1,000 at the Pro-Law Am Golf Ball Drop on Wednesday.

The ball drop is held prior to the start of the tournament. Officers with the Dale County Sheriff’s Office take the golf balls up in a helicopter and drop them over a green on the driving range at Cambrian Ridge. If a ball lands in the hole, the owner of that ball wins $1,000. 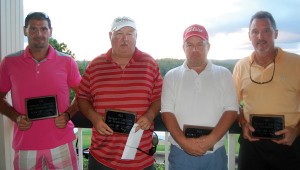 For 14 years the Fraternal Order of Police has hosted the tournament at Cambrian Ridge to help bring awareness and funding to various organizations in the area.

The tournament provided more than just funding and awareness for local organizations, but it also gave the chance for state and local law enforcement officers to have some fun.

A variety of officers participated in the event including agents with the Alabama Bureau of Investigation, State Troopers, game wardens and local police officers.

“That’s what is nice about it,” Smyth said. “To see those guys let their hair down for a day and go out and have fun. Their job is so stressful, and they have a lot of pressure on them.”

Sam Roberts, president and CEO of CorStone Industries, said this is a tournament he feels strongly about supporting.

“My wife and I have been supportive of anything supporting children’s advocacy,” Roberts said. “Officers don’t make a whole lot of money, and they’re not in the position often times to create these stronger organizations for themselves, so they need the outside help.”

With state funds continuously being cut year after year for the Butler County Children’s Advocacy Center, Smyth said local support is needed now more than ever.

“It means the world to us and our organization, because we have to rely more and more on our community for funds and support,” Smyth said. “We couldn’t do what we do without the community participation and volunteers. It’s so heartwarming to know that people are willing to give up their time and their talent and their treasure to support us and the work we’re doing with children and families in our little neck of the woods.”