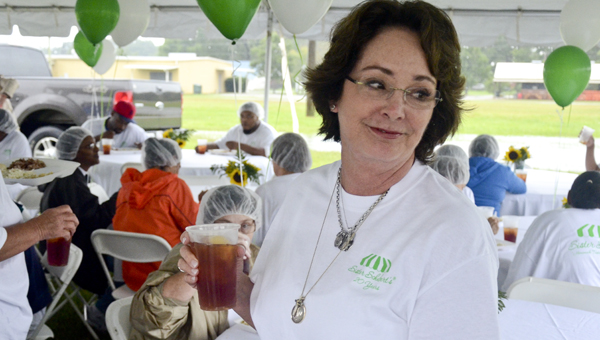 Patricia “Sister Schubert” Barnes and the rest of the employees of Sister Schubert’s bakery in Luverne celebrated 20 years with an outdoor lunch on Tuesday.

A little rain didn’t stop Sister Schubert’s bakery from celebrating its 20th anniversary in Luverne with a reception on Tuesday.

Employees were treated to a barbecue lunch from Hook’s BBQ (with a side of Sister Schubert’s famous dinner rolls) and dessert from Dean’s Cake House in Andalusia.

“We’ve got 168 employees, and we’ll be feeding them in shifts until 6 p.m.,” said Patricia “Sister Schubert” Barnes during the first luncheon.

While speaking to the first group of employees, Barnes asked how many of them had been with the company for over 10 years.

Dozens of hands went up, and a number of those employees have been with Sister Schubert’s for the full 20 years.

“I’m going to be here another 20 years, and I hope you are too,” Barnes said. “We wouldn’t have had the success we’ve had without you believing in the product along with us.”

Employees were also given a special 20th anniversary t-shirt to commemorate the occasion.

Barnes started the company from her own kitchen in Troy, and she currently works in Luverne while living in Andalusia.

The Luverne bakery was the first location to manufacture Sister Schubert’s famous rolls, which has expanded in recent years to include bakeries in Saraland, Ala. and Horse Cave, Ky.

Besides having 16 different products available to both retail and wholesale customers, the rolls also show up in restaurants around the country. 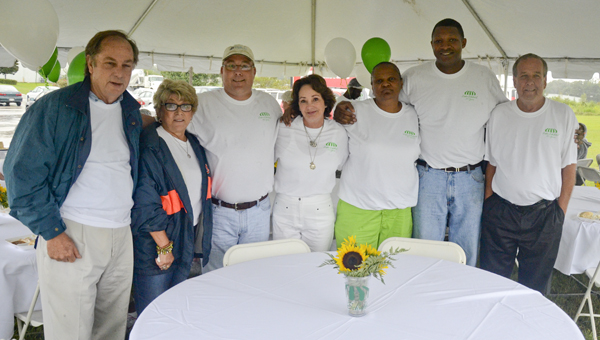 “Sister Schubert” and her husband, George Barnes, stand with some of the employees who have been with the company for 20 years. From left to right: George Barnes, Kay Petrey, Bruce Roberts, Patricia Barnes, Carolyn Hill, David Williams and Bill Caldwell.