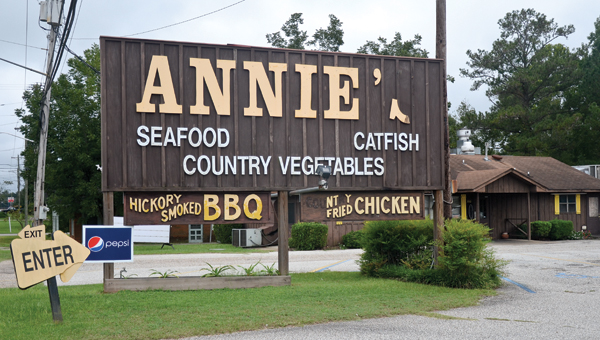 After being a part of life in Luverne for more than 30 years, Annie’s restaurant closed down this past weekend.

When local businesses re-opened after Labor Day, one local establishment didn’t join them: Annie’s, a restaurant that has been in Luverne for over 30 years.

Owner David Finlayson said a number of factors contributed to the closing of the restaurant, including a steep decline in the number of patrons since school started.

“We were watching the numbers, and the minute school started back, the numbers dropped,” Finlayson said. “The beach traffic were the ones keeping us alive, and after local people quit coming, we made a decision to close it down.”

Annie’s was founded 31 years ago by David’s parents, Jack and Annie Finlayson.

The younger Finlayson said his father wanted to get with into the restaurant industry, and the business passed to David after his mother died five years ago.

Since then, Finlayson said he had entered into a lease-purchase agreement to handle the managing of the restaurant, and that didn’t turn out like he would have liked.

Finlayson also owns two restaurants near Prattville, the Catfish House and the Fantail, and he said the past year has been difficult for all restaurants, which only added to Annie’s problems.

“It’s a very, very insecure time, and restaurants are frivolous things that people don’t have to spend money on,” he said. “With gas prices like they are, something has to give.  I think all those factors have made it tough.”

Finlayson said he plans to put the building up for sale as a turnkey operation, since it is already equipped to serve as a restaurant.

He said there are a lot of people wanting to get into the restaurant business.