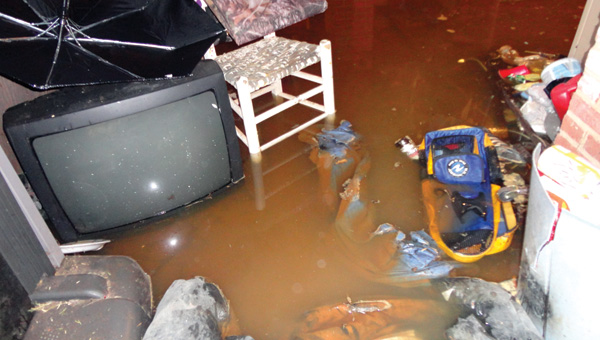 A heavy downpour on Tuesday flooded the basement of Marindy Bush’s home on Overlook Drive in Greenville. (Courtesy Photo)

All Marindy Bush could do was watch as the water continued to rise on Tuesday morning.

She knew what was coming.

“The only thing I could do was wait for it to get here,” she said.

A heavy downpour was more than the drainage pipes near her home on Overlook Drive could handle, causing a flash flood near Greenville Middle School. Bush said the drainage ditch located between her home and the school filled up and began spilling out water in just more than 30 minutes.

“When we get a heavy rain that just beats down like we did today, it floods right here and runs down to my house,” Bush said pointing to the open field next to her home.

A trench 10 inches deep and 10 inches wide dug last week by the City of Greenville in preparation for Tropical Storm Isaac, and sandbags piled two feet high near the door to Bush’s basement, weren’t enough to stop the water from entering the house on Tuesday.

“There was at least 2 ½ feet of water in the basement,” Bush said.

This isn’t the first time Bush has had to deal with her home flooding. She said that in the last 10 years, her home has flooded at least four times.

Greenville Mayor Dexter McLendon said he was aware of the problem and that the City has tried to find a solution.

“We tried to put sandbags there and dig the ditch out some, but when we have rain numbers like we had (Tuesday), there’s not much we can do,” he said.

McLendon said the City has looked into replacing the drainage pipes in the area, but that would bring another set of problems.

“If we do that, we’re going to be dumping water into another area and causing that area to flood,” he said. “(Bush) is right. This is a problem, and we’ve tried to help prevent this from happening, but when we get these kinds of rains, we have a problem with that area flooding, and it’s not just that area. We have spots all around town that flood.”

Bush credited the City for its efforts to prevent the water from entering her home, but said its is “devastating each time this happens.”

“It’s a horrific event,” she said. “It’s just like a fire. The first time I lost a lot of sentimental things like family photos. All of that is gone, but we still had a lot of things stored in the basement, and now those things are ruined. It’s just heartbreaking.”