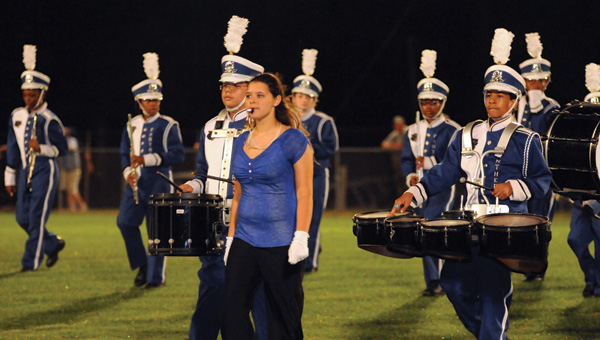 Georgiana’s marching band will be rockin’ and rollin’ around the football field this year with music from the 1950s and 1960s.

With Elvis tunes and the “Old Time Rock and Roll,” the forty-two students will be working hard to get the Panther fans excited.

“I love ‘50s music,” band director Abigail Turner said. “My dad plays the guitar and sings. I have always grown up around it.”

When Turner started two years ago, the band was made up of just six students.

Beyond the normal challenges of playing while marching on a field, Turner faces more challenges by having young students participate.

“We’re basically moving forward because most of my students are in grades fifth-ninth,” Turner said. “Our age group is really low so we’re still covering a lot of the basics and trying to add some intermediate music and just move forward from there.”

While practicing every day, Turner is working toward the ultimate goal of having every song played on the field accompanied by marching.

“I would like to be able to successfully put all of our songs on the field and do movement to each one of the songs,” Turner said. “I know that may seem like a small thing but for such a young band, it is a big thing.”

The most exciting thing for Turner is seeing the students rejuvenated and more excited than ever to participate in the band every Friday night.