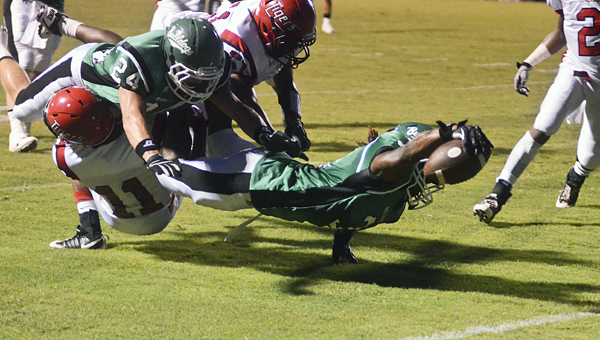 Brantley's Andrew Parker reaches for the endzone and the Bulldogs' second touchdown of the night.

Coaches often talk about the importance of special teams play, and a kick return provided a key boost for Brantley when the Bulldogs needed it on the way to a 36-6 victory over rival Luverne on Friday night.

The Bulldogs jumped out to an early 14-0 lead, but Luverne answered with a 21-yard run by Jonathan Chambers, who took a handoff around the left end for a touchdown.

On the ensuing kickoff, Brantley’s Andrew Parker fielded the ball at his own 16-yard line, found a seam through the middle of the field and went untouched to the endzone.

“My teammates got some good blocks and it was just wide open,” Parker said.

“We work a lot on special teams, and we count on them to help us,” said Brantley head coach David Lowery. “Certainly Parker’s run was a huge momentum change to help get it back in our favor.”

That put the Bulldogs up 21-6, and they never looked back.

In addition to the kick return, Parker found the endzone on a nine-yard run in the first quarter for Brantley’s second touchdown and again in the third quarter on a 19-yard run to make the score 27-6.

Several other Bulldogs also got in on the scoring action.

Quarterback Andrew Lowery connected with O.J. Guice for a 23-yard touchdown pass for the Bulldogs’ first points of the night.

With 5:07 to go in the game, Brantley’s Zeth Johnson lowered his shoulder and scored from two yards out after a 19-yard run by Adrian Howard for the Bulldogs’ final touchdown.

The Bulldogs also saw solid action from Braxton Barnes and Brandon Walker, who both added hard-nosed carries from the backfield.

The final nail in the coffin for the Tigers came after a bad snap on a punt deep in their own territory, when Jamarcus June recovered the ball and ran out of the endzone for a safety.

Luverne had a number of long plays courtesy of Chambers, June and quarterback Kenterius Womack, but the Tigers couldn’t string them together into scoring drives.

Luverne struggled with turnovers all night, fumbling on their second offensive play from scrimmage, but the Tigers’ defense forced Brantley to turn the ball over on downs on that occasion.

“We dug deep defensively several times, but eventually you’re going to wear out, and we did,” said Luverne head coach Les Sanders.

A muffed punt set up Brantley’s second touchdown of the night, but the Tigers managed to keep Brantley out of the endzone after the Bulldogs had a touchdown called back for pass interference and started a drive at Luverne’s 30-yard line.

As the game wore on, several Tigers had to come out of the game because of cramping.

“We’ve got eight or nine kids playing both ways and on special teams, and in a game like this and humidity like this, it’s going to catch up with you,” Sanders said.

Sanders also said that the Tigers have to work on execution before next week’s game.

“We’ve got to work on Luverne,” he said. “Our kids didn’t give up.  They fought.  But you’ve got to play every play against good teams because those three or four that you don’t, big things happen.”

Despite the win, Lowery said the Bulldogs have a number of things to improve before the next game, especially on the defensive side, where several ill-timed encroachment penalties extended Luverne drives.

“We had too many defensive penalties, and we also had opportunities in the red zone that we didn’t cash in on,” Lowery said. “This is a good start, but hopefully we can continue to get better as the season goes on.”

While not everything went as planned, the win was the result Brantley was looking for after a week of preparation.

“We focused all week for this, and we were ready,” said Parker.