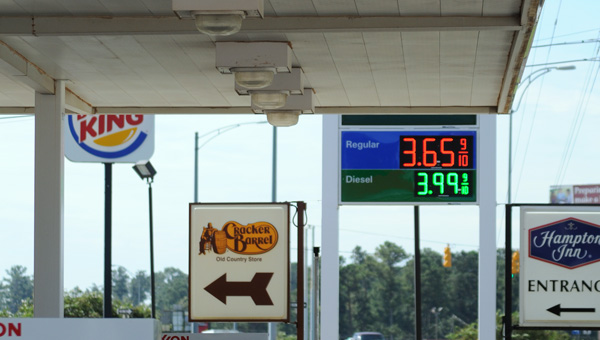 Experts expect Hurricane Isaac to cause prices at the pump to rise. (Advocate Staff/Andy Brown)

Hurricane Isaac’s impacts will likely be felt at the pump.

In anticipation of the storm, which is expected to make landfall near the Mississippi–Louisiana border, oil companies have evacuated their rigs in the Gulf of Mexico. Experts estimate that as much as 75 to 90 percent of oil production in the Gulf could be shut down.

“Hurricane Isaac will be the story this week,” said Patrick DeHaan, GasBuddy.com senior petroleum analyst.  “It’s entirely within the realm of possibility that we see refinery outages, oil production losses, and gasoline supply issues – essentially all the things you don’t want to happen. While this storm doesn’t currently appear as powerful as other storms that have caused similar concern – we’re continuing to watch the situation develop. One thing is for sure, I’m concerned that this storm will temporarily drive prices higher in the short term.”

In Butler County, prices have already begun to rise.

The average price for a gallon of unleaded gasoline in Greenville last week was $3.54. The current average is $3.60.

On Sunday, Gov. Robert Bentley declared a state of emergency, which could actually help keep gas prices in check.

In Alabama, if the governor announces a state of emergency, gas stations are not allowed to charge more than 25 percent above average price charged in the same area within the last 30 days – unless the increase can be attributed to a reasonable cost, according to Attorney General Luther Strange.

“I urge our citizens to be cautious of those who would prey upon them through crimes such as price gouging, looting and home repair fraud,” Strange said. “I warn the criminals that if they do so, they will be punished.”

Strange said the penalty for price gouging is a fine of up to $1,000 per violation.