Locals stock up on storm essentials 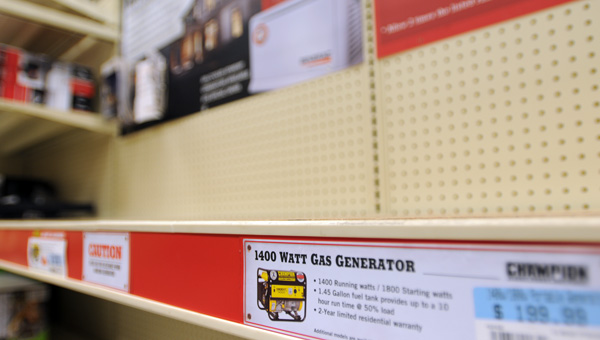 Hurricane Isaac will leave a mark on Butler County.

However, weather officials are still uncertain of what that mark may be.

Isaac slowly gained strength over the weekend and took a more western path, but Butler County is not completely out of the clear, according to information released Tuesday by the National Weather Service.

Officials predicted on Tuesday that a strong Category 1 hurricane will make landfall in southeast Louisiana, and Butler County could see wind gusts between 40 and 50 miles per hour by

Tuesday evening that will be accompanied by 3-6 inches of rainfall that will carry into Wednesday.

Tornado risks from the storm will also increase across the state as a result of the storm.

With the threat of inclement weather, citizens have been busy preparing for the storms arrival. Area businesses have reported seeing an increase in the amount of foot traffic in their stores.

“It has been an absolutely tremendous response,” Walmart store manager James Packer said. “So far, it seems that people up north are going down to prepare, so that means that (Monday) and (Tuesday we saw) the transition from those in the south coming north.”

Tractor Supply Company has also been flooded with customers, according to store manager Ronnie Whitman.

“It got crazy nuts Saturday,” Whitman said. “We’re seeing a lot of out-of-towners coming to the coast to get their boats or check on their second house or people coming out of there pulling their boats.”

On Sunday, Packer said his store saw a 60 percent increase in sales and the store is working to cater to what customers need.

Items that stores have sold out of quickly include bottled water, batteries, duct tape, tarps and flashlights.

Stores aren’t the only ones seeing an increase in business. Hotels in the area are seeing heavy traffic as well.

“It has been slightly chaotic, mainly with people calling around searching for rooms for the last few days,” said Amit Patel, managing partner for Hampton Inn, Holiday Inn Express, Best Western and Comfort Inn in Greenville. “However, things keep changing. As the storm has moved more westward a lot of people are also canceling.”