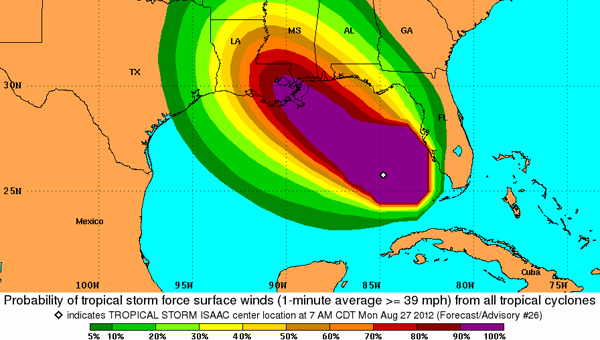 According to a map released by NOAA this morning, the probably for tropical storm-force winds (an average greater than 39 miles per hour) for Crenshaw County remain in the 40-percent range. (Graphic courtesy of NOAA)

While forecast models are moving the track of Tropical Storm Isaac away from Alabama, the National Oceanographic and Atmospheric Administration (NOAA) is urging citizens to be prepared.

“Don’t compare what you see on the satellite today with what may be happening 36 hours from now,” said Jeff Cupo, a meteorologist from NOAA’s Mobile-Pensacola station.

Cupo gave a briefing via conference call to emergency management agencies across south Alabama, southeast Mississippi and the Florida panhandle on Monday morning. Briefings are being held each morning and evening until the end of the event.

“We’re narrowing down where it will make landfall, but for one-to-two days out, there is an error of about 80 nautical miles,” he said.

Cupo also suggested that people not focus on the black line in the center of a prediction track but on the entire cone, which represents the entire range of possibility.

He said that rain bands will begin to move into the area later today with winds picking up by Tuesday afternoon or evening.

“We want everyone to maintain vigilance because it’s going to be here quicker than you might think because of the large area of low pressure it maintains,” Cupo said.

According to a map released by NOAA this morning, the probably for tropical storm-force winds (an average greater than 39 miles per hour) for Crenshaw County remain in the 40-percent range.

“We’re seeing dry air come in off the continent, and that will have an effect. We’ve dropped the rain totals down,” Cupo said. “We still expect 6-12 inches of rain. That additional rainfall, coupled with winds, could take many trees down.”

Cupo also said there is an isolated chance of tornadoes with the onset of precipitation bands.

“Don’t be surprised if you see a tornado watch issued sometime Tuesday,” he said.

Future updates on Isaac and how it will impact Crenshaw County will be posted as it becomes available.

In the event that any closings or cancellations occur, those will also be posted.